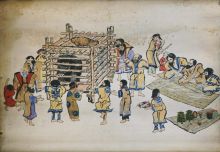 The Ainu are a people that formerly lived on Hokkaidō, northern Honshū, the Kuriles and the southern part of Sakhalin. Nowadays, they are mainly living on Hokkaidō. From the 17th century on, the Ainu had strong trade relations with Japan, causing them to be dependent on the trading goods offered by Japanese merchants. With the beginning of the Meiji era (1868-1912), the Japanese government made great efforts to establish Hokkaidō and the Kuriles as part of the Japanese Empire. The Ainu in those areas were treated as Japanese citizens, and they were forced to abandon their traditional culture and language. Nowadays, the Ainu are struggling for revitalizing their culture and highly-endangered language.

The workshop will introduce and discuss important issues of today’s Ainu life, society and culture. The second half provides an introduction to the Ainu language.