Home » Events » The Buddhist Makeup Artist: A Personal Story about Sexuality and Transformation

The Buddhist Makeup Artist: A Personal Story about Sexuality and Transformation 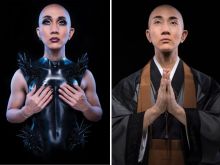 Please join us for an exciting talk. Kodo Nishimura—a queer Buddhist priest and makeup artist— will share his personal life story and, for the second half of the talk, demonstrate his artistry by making up a student.

Kodo Nishimura is a global makeup artist and a Buddhist priest in the Japanese Pure Land tradition called Jōdo Shinshū. He grew up in the ever-changing city of Tokyo, in a serene Buddhist temple. As a child, he practiced Japanese flower arrangement for eight years. At the age of 18, he moved to the United States, and graduated from Parsons The New School for Design in NY majoring in Fine Arts. In 2015, he completed his two-year Buddhist training in Tokyo. In 2017, he sought to further his classical training by enrolling at Makeup Designory in LA.

His story as a makeup artist and a Buddhist priest is celebrated globally including The Times Newspaper, BBC Radio, Vogue, The New York Style Magazine, Buzzfeed, Cosmopolitan and more. He has experience as a brand ambassador for L’oreal’s NYX Professional Makeup Japan. Also, he was chosen as a multilingual spokesperson for “Global Views,” a study abroad project by the US Ambassador to Japan, Ms. Caroline Kennedy.

His makeup work has appeared in national shows such as Miss Universe, Miss USA, The View and commercials for Toyota’s Lexus GS and Listerine. His magazine credits include Nylon, LA Weekly, Men’s Health, Esquire, US Weekly Magazine, and the cover of Life & Style Magazine. He has done makeup for Chloe x Halle, Christina Milian and Carson Kressley.

He is also passionate about education and he has taught numerous seminars including free LGBTQ+ friendly makeup classes. His mission is to empower all people of all genders using makeup skills with a hint of Buddhism.