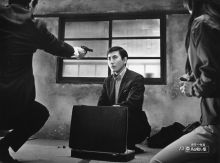 The narrative consists of a complicated structure involving a number of flashbacks. The film centers on a notorious killer named Shiozawa, who is feared by yakuza clans but disguises his identity by managing a small Japanese restaurant. One day, Shiozawa meets Keiko, who starts to hang around him once she finds out he has money. Keiko begins working at his restaurant while making vain attempts to seduce Shiozawa. Meanwhile, Shiozawa contracts with the Kimura-gumi yakuza clan to murder Ōwada, the boss of rival clan, for 20 million yen. When Shiozawa succeeds in killing Ōwada by his trained method using just one needle, one of the Kimura-gumi members, Maeda, asks Shiozawa to take him as an apprentice, only to be rejected. Maeda begins to have intimate relations with Keiko, and the couple soon plots to murder Shiozawa and take his money. Before murdering him, however, Maeda and Keiko try to get Shiozawa to steal 200 million yen worth of drugs. The heist goes according to plan, but Maeda’s attempt to kill Shiozawa is unsuccessful, since Shiozawa, having anticipated Maeda’s betrayal, unloaded Maeda’s gun beforehand. Another unexpected event occurs when Maeda’s boss Kimura intervenes. Shiozawa kills Kimura with his needle method, and quietly departs from the spot while leaving the remaining drugs to Maeda and Keiko.

Ever since the success of the French crime film Zigomar in 1911, the Japanese film industry has produced numerous movies depicting criminals and the detectives who try to apprehend them. Chivalric yakuza, modern mobsters, knife-wielding molls, hardboiled gumshoes, samurai detectives, femme fatales, and private eyes populate Japanese cinema, from period films to contemporary dramas, from genre cinema to art film, from the work of genre auteurs like Makino Masahiro to masters like Kurosawa Akira. Cinematic representations of crime have served in Japan to draw the boundaries of society and the nation, define the nature of reason and epistemology, shape subjectivity and gender, explore the transformations of modernity, and even express the desire for political transformation. Surprisingly, little of this rich lode of cinema has been introduced abroad. This series, co-sponsored with the National Film Center of the National Museum of Modern Art, Tokyo, will present some of the masterworks of Japanese gangster film, detective cinema, and Japanese noir, in subtitled archive prints that have rarely been seen abroad. The series will conclude with a symposium featuring an international panel of experts on Japanese crime film, and a world premiere screening of a newly struck English subtitled print of the classic gangster melodrama, CHUTARO OF BANBA. All films are in 35mm with English subtitles. This is the third of 10 films.