Home » Events » Cosmology Beneath the Master of Medicine: The Eighth-Century Pedestal at Yakushiji, Nara

Cosmology Beneath the Master of Medicine: The Eighth-Century Pedestal at Yakushiji, Nara 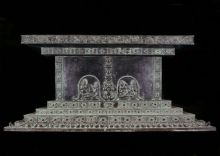 Yakushiji temple in Nara houses a 2.5-meter bronze sculpture of the Master of Medicine Buddha with two attendant bodhisattvas; the triad was completed ca. 718. A temple of the same name was vowed by Emperor Tenmu (r. 672–686) in 680 for an earlier capital, Fujiwara, when his chief consort, later Empress Jitō (r. 686–697), became ill. Visually and metaphorically, the 1.5-meter bronze pedestal beneath the Master of Medicine icon supports the Buddha’s promise to quell forces that sicken people and foster chaos. The elegant and powerful blend of Indic foreign figures, Chinese cosmology, grape vines, and symbolic motifs represented on the pedestal have intrigued scholars for over a century as they seek but fail to understand their combined meaning. Focusing on a search for continental sources, motifs in Buddhist contexts alone, or “Silk Road” origins, and falling back on unrelated meanings for symbolics such as the four directional animals, art historians have overlooked evidence provided by the histories and literature of “ancient Japan” that create and narrate the realm of Tenmu “all under heaven.” What emerges from a reexamination of Yakushiji in two times and places and a review of copious scholarship on the pedestal is, in large part, the creation and maintenance of memory: the Empress and her Emperor carried forward in image and concept to Nara from the old Fujiwara capital, and the representation of Tenmu’s realm—re-presented or imagined—on the pedestal in artistic bronze relief.

After teaching Japanese art history and East Asian Buddhist visual culture in the US for over fifteen years, and curating the occasional museum exhibition, Bogel moved to Japan in 2012 for the opportunity to develop a new type of international graduate program situated not in an “international division” of a Japanese university but squarely within a Japanese Humanities graduate school. She continues to research and write about Buddhist temples and icons—now much closer at hand—and to develop deeper expertise about Japanese cultural exchanges with the Korean peninsula, especially during the seventh and eighth centuries. In addition to the current manuscript project on Yakushiji, she is writing an essay about contemporary Kyoto temple events called “Light Ups” and another on “Religion and Visual Arts” for the Bloomsbury Handbook of Japanese Religions.