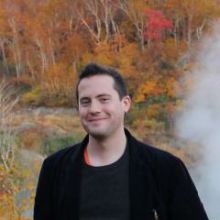 In his recent monograph from Harvard University Press, Writing War, Moore analyzed over two hundred diaries by Japanese, Chinese, and American servicemen from the Asia-Pacific Theater of the Second World War. Reading closely texts in manuscript, self-published, and commercially published form, Moore explains what diaries can tell us about subjectivity in America, China, and Japan, and the experience of ‘total war.’ Addressing thorny issues such as privacy, reliability, and the boundaries between language and experience, Moore will conclude the talk by discussing his new project on the wartime personal documents of children and adolescents in Britain, Japan, China, and the USSR.

Aaron Moore grew interested in East Asian languages as an undergraduate at Oberlin College, where he conducted original research in Japanese.   At the University of Michigan, Ann Arbor, Moore wrote his graduate thesis on the changing concept of “ethnicity” amongst first, second, and third generation Koreans in Japan.  He completed his Ph.D. from Princeton in 2006, with a dissertation on Chinese Nationalist, American, and Japanese WWII diary writing.  As a postdoctoral fellow at Harvard, he finished the bulk of his first book manuscript, and he has also taught at the University of Virginia.  He held a postdoctoral position at Oxford University, where he launched his second book project, and took up his current position in 2010.