Dirty Sexy Haiku: Senryū, Bareku, and the Perversification of Haikai 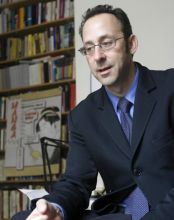 Now a global poetry, the haiku was originally a type of verse flourishing in Japan from the 16th through 19th centuries. Widely renowned for its minimalism of form (typically running 3 phrases in 17 syllabets) and aesthetics (deploying nature imagery to profound, even philosophical, effect), historically the haiku was much more: its surprisingly numerous modes tended to the erotic, satirical, crude and mischievous. Drawing from my forthcoming edited anthology, The Penguin Book of Haiku (London: Penguin Classics), I contend that the “Japanese” haiku was always a world literature, an invented tradition that began emerging during the late nineteenth-century transnational encounter between Japan and the West. Seeking to reclaim the haiku “form” from its conventional presentation as the expression of some Zen, nature-loving, peaceful people, I instead present haiku “modes” in their broad-ranging, anatomically correct splendor.

Adam L. Kern studied Japanese literature at Harvard University, where he earned his PhD in East Asian Languages & Civilizations before joining the faculty for nearly a decade. His experiences in Japan, aside from affiliations with the University of Kyoto, the University of Tokyo and the National Institute of Japanese Literature, include brief stints as a staff reporter for The Kyoto Shimbun and an editorial intern with Kōdansha Publishers. Author of Manga from the Floating World: Comicbook Culture and the Kibyōshi of Edo Japan (Harvard University Asia Center, 2006), Kern is Professor of Japanese Literature and Visual Culture at the University of Wisconsin-Madison.