A bilingual workshop sponsored by CEAS 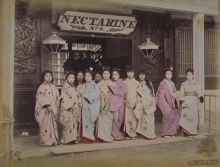 The workshop will introduce some of the new approaches to the social history of prostitution and Hansen’s Disease (Leprosy) that have emerged in Japanese scholarship in the past two or three years.  The three presenters are all leading representatives of a younger generation of Japanese scholars who stand at the cutting edge of historical research on these important topics. The two papers on the history of prostitution will be presented in Japanese, but will be followed by a brief summary of key points in English.  In order to facilitate the meaningful exchange of ideas, discussion will be conducted bilingually, with participants free to communicate in either Japanese or English

2:40-3:20pm  「芸娼妓解放令の歴史的意義―民事判決原本から―」人見佐知子 (甲南大学）”On the Historical Significance of the 1872 ‘Emancipation Edict for Prostitutes and Entertainers’: Evidence from the Civil Courts”—HITOMI Sachiko (Kōnan University) Presentation in Japanese, with English summary