The Great East Earthquake and Tsunami: How Breaking News Became a Family Story 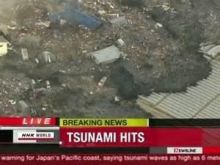 Maxine Hughes is a senior producer for BBC News. She currently work as the Bureau Editor for Wales, and is responsible for the BBC’s coverage of Wales for National TV and Radio.  Prior to her current role in Wales, she worked for BBC Newsgathering across TV, online and radio for the BBC’s national news, responding to all aspects of breaking news from politics to crime.

On 11th March, 2011, Hughes was sent to Japan to cover the earthquake and tsunami where she served as the BBC’s live producer, providing live coverage for the BBC News Channel and BBC World News. The tsunami measured a massive 9.0, and killed nearly 20,000 people. Not only had Hughes visited Japan many times, but her younger sister and her partner were living in Japan at the time of the earthquake – just an hour from the epicentre. As part of the BBC News team, she arrived in Japan and headed straight for her sister’s house. From that moment on, Hughes’ sister, her boyfriend, and many of their friends became involved in her coverage. Life for them completely changed that day and even more so for many of their friends who lost relatives in the disaster.

Since the disaster, Maxine Hughes has been back to Japan, and visited some of the worst hit areas and put together a TV and radio series on the recovery process. Although she covers news stories every day, and they can often be harrowing and difficult to cover, it is this story that she hopes to share, which will always stand out in her career as being the one that has touched her the most.