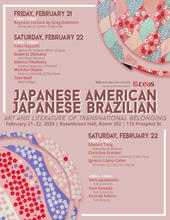 The workshop assembles a small group of leading scholars, curators, and practicing artists in the US and Brazil to discuss the historical trajectories of the two largest communities of Japanese immigrants and their descendants. It will feature the latest research on the formative modernists in both countries, with a focus on the Seibikai (Seishi Bijutsu Kenkyukai) art collective founded in Sao Paulo in 1935, and their contemporaries in the United States. The workshop will likewise solicit the involvement of practicing contemporary artists whose work interrogates aesthetic, intergenerational, and transnational belonging. And by inviting curators from the Smithsonian, Japanese American National Museum, and Harvard Art Museums, this workshop will generate discussion about exhibition and comparative study of Japanese American and Japanese Brazilian art, photography, and visual culture.