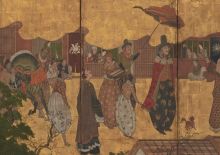 In the latter half of the sixteenth century an extraordinarily multi-faceted and imaginative visual and material culture emerged in Japan in the wake of an acute escalation in Japanese, Chinese, Korean, Portuguese, Spanish, Italian, Dutch, and English political and mercantile interaction. An important category of this culture is typically named “Nanban” (a name for foreigners coming across Japan’s southern seas, and specifically the Iberians). With this workshop we begin a conversation around the Japanese “Nanban moment” as giving local form to a critical juncture in world history when for the first time all the major urban civilizations became interconnected on a global level. As such it seeks to reframe Nanban art and culture as baroque in a Japanese order of things that begins to take form by the turn of the seventeenth century, in so doing exploring some of the interactions and associations placing the Japanese archipelago within a worldwide network of contacts encompassing Asia, Europe, Africa, and the New World. We also see the workshop as an opportunity to reflect, from an East Asian perspective, on the vocabularies and epistemic categories encompassing theorization of the baroque, the global, and the early modern.