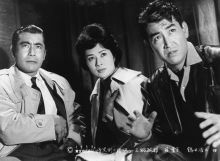 A detective in civilian clothes arrives in a rural town to investigate crimes involving two local yakuza families, Ōoka and Kozuka. These two organized crime groups violently compete over territory, and over prostitution, drugs and gambling markets in the area. It is soon revealed that the local mournful bartender used to be a yakuza member as well, but after his wife died, allegedly in an accident, he has taken an oath to quit in order to become a katagi, the yakuza term for a law abiding citizen. The relationship between him and the detective becomes warmer after the detective raises suspicions that the wife had actually been killed as a result of clashes between the yakuza gangs he is investigating. Despite some initial doubts, the bartender gradually grows to trust the steadfast detective, and eventually agrees to work with him. Yet, unlike the detective who is determined to bring the criminals to justice in the court of law, the bartender envisions a less lawful outcome for those responsible for the death of his beloved wife.

Ever since the success of the French crime film Zigomar in 1911, the Japanese film industry has produced numerous movies depicting criminals and the detectives who try to apprehend them. Chivalric yakuza, modern mobsters, knife-wielding molls, hardboiled gumshoes, samurai detectives, femme fatales, and private eyes populate Japanese cinema, from period films to contemporary dramas, from genre cinema to art film, from the work of genre auteurs like Makino Masahiro to masters like Kurosawa Akira. Cinematic representations of crime have served in Japan to draw the boundaries of society and the nation, define the nature of reason and epistemology, shape subjectivity and gender, explore the transformations of modernity, and even express the desire for political transformation. Surprisingly, little of this rich lode of cinema has been introduced abroad. This series, co-sponsored with the National Film Center of the National Museum of Modern Art, Tokyo, will present some of the masterworks of Japanese gangster film, detective cinema, and Japanese noir, in subtitled archive prints that have rarely been seen abroad. The series will conclude with a symposium featuring an international panel of experts on Japanese crime film, and a world premiere screening of a newly struck English subtitled print of the classic gangster melodrama, CHUTARO OF BANBA. All films are in 35mm with English subtitles. This is the seventh of 10 films.