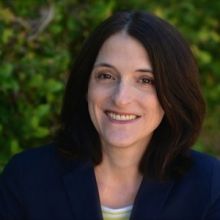 How is religion framed for children in secular contexts such as public education? How does religion fit into modern identity formation?  In this paper, I will look at how religious figures, practices, and places have been presented in Taiwanese textbooks over the last century. My research shows a longstanding commitment to religious diversity and a respect for historically religious sites.  Practice and belief, however, are treated with greater ambivalence in these textbooks: not all rituals are appropriate, at least in their traditional forms, for contemporary society, and civic values have displaced those once drawn from religion.  Underlying the treatment of Buddhism, Daoism, Islam, Christianity, and other traditions is the problem of defining what a “religion” is and what is means to be “Taiwanese.”

Natasha Heller received her MA in Buddhist Studies from the University of Michigan, and her PhD in East Asian Languages and Civilizations from Harvard University. Before coming to UCLA, she was a Mellon Postdoctoral Fellow at the University of California, Berkeley. Her previous research has examined the relationship between religious belief and cultural practices, primarily focusing on Buddhism during the Song, Yuan, and Ming dynasties. Heller has recently published a study of the Yuan dynasty Chan master, Illusory Abiding: The Cultural Construction of the Chan Monk Zhongfeng Mingben, in which she investigates Mingben’s use of poetry, calligraphy, and gong’an commentary in the context of his distinctive Chan teachings. Heller’s current book project concerns picture books published by Buddhist organizations in Taiwan, and how such children’s fiction not only teaches young people about the Buddhist tradition, but also instructs them on how to relate to clergy, family members, and society. She is also the book review editor for the Journal of Chinese Religions, and serves on the board of the Society for the Study of Chinese Religions and the editorial board of the Journal of Chinese Buddhist Studies.