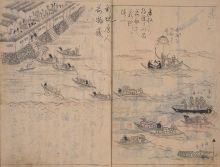 Although overseas travel was off limits to Japanese themselves from the 1630s through the 1860s, thousands of Chinese ships sailed into Nagasaki Harbor during that time, bringing the bounty of the continent to an eager, captive audience: silks and satins, sugar, ginseng and other medicines, minerals, animal products—and books. Much attention has been given to a few prominent works of Chinese fiction that became widely familiar to the Japanese public in the early modern period. Yet many fundamental questions remain unanswered about the broader reception history. What portion of books imported from the continent were titles of fiction? How much of China’s literary output made it to Japan, and how quickly? How did the scale and speed of importation change over time? What percentage of titles, and what sorts, were reprinted for the domestic market? In his talk, Professor Fleming will point toward answers to these and other large-scale questions. At the same time, he will illustrate his discussion by tracing the journeys taken by individual texts as they traveled from China to Japan. Subjected to various forms of rewriting—copying, editing, annotation, and finally translation and adaptation into vernacular Japanese—these texts reemerge in altered forms reflecting the very different social, political, and historical contexts of Japan under Tokugawa rule.

William Fleming is Assistant Professor of East Asian Languages and Cultural Studies at the University of California, Santa Barbara. His research focuses on early modern Japanese literature and its engagement with the world outside Japan. He completed his undergraduate and graduate studies at Harvard University and has spent time as a visiting researcher at Kyoto University, Waseda University, and the National Institute of Japanese Literature in Tokyo. Before moving to UCSB, he taught in the Department of East Asian Languages and Literatures and the Theater Studies Program at Yale.