Home » Events » "The Road to Hell" - Jigoku no magarikado (地獄の曲がり角) 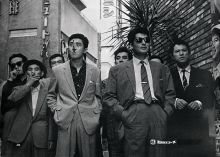 Maki, working a dead-end job at the Sakura Hotel, comes across a murder in one of the rooms and discovers a mysterious key near the body, with a note suggesting that it is one of three. In the next morning’s paper, he learns that the murdered man was an assistant at a government ministry who had just gotten out of prison for his involvement in a bribery scandal. What’s more, 150 million yen have gone missing! Thrilled with this unexpected opportunity to change his life, Maki becomes a new man, much to the chagrin of his girlfriend Akiko, who works at a flower shop at the hotel and dreams of living together with Maki. Meanwhile, a mysterious woman named Takako, who is staying at the hotel in the room next to the one in which the murder took place, seduces Maki with the aim of stealing the key away from him. By setting up a tape recorder in the hotel room to record secret liaisons, Maki is able to blackmail for money and soon finds himself contesting a yakuza organization. While he increasingly shows himself capable of becoming a man of considerable influence, Akiko from the flower shop dislikes this transformation of her lover. However, her disapproval is not enough to wake Maki up from the dream he is pursuing involving the mystery of the three keys and unimaginable sums of money. Released the autumn before Japan was engulfed by mass protests against the renewal of the U.S.-Japan Security Treaty (Anpo) in the spring of 1960, this stylish crime drama follows an ordinary schmuck into a well-spun web of government and corporate corruption. Once ensnared, can he ever escape? If so, at what cost?

Ever since the success of the French crime film Zigomar in 1911, the Japanese film industry has produced numerous movies depicting criminals and the detectives who try to apprehend them. Chivalric yakuza, modern mobsters, knife-wielding molls, hardboiled gumshoes, samurai detectives, femme fatales, and private eyes populate Japanese cinema, from period films to contemporary dramas, from genre cinema to art film, from the work of genre auteurs like Makino Masahiro to masters like Kurosawa Akira. Cinematic representations of crime have served in Japan to draw the boundaries of society and the nation, define the nature of reason and epistemology, shape subjectivity and gender, explore the transformations of modernity, and even express the desire for political transformation. Surprisingly, little of this rich lode of cinema has been introduced abroad. This series, co-sponsored with the National Film Center of the National Museum of Modern Art, Tokyo, will present some of the masterworks of Japanese gangster film, detective cinema, and Japanese noir, in subtitled archive prints that have rarely been seen abroad. The series will conclude with a symposium featuring an international panel of experts on Japanese crime film, and a world premiere screening of a newly struck English subtitled print of the classic gangster melodrama, CHUTARO OF BANBA. All films are in 35mm with English subtitles. This is the second of 10 films.