Home » Events » The Significance of 'the Frontier' to Japanese History

The Significance of ‘the Frontier’ to Japanese History 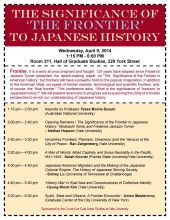 Frontier. It is a word at once pregnant and fraught. 120 years have elapsed since Frederick Jackson Turner presented his epoch-making paper on “The Significance of the Frontier in American History,” but frontiers still have a powerful hold on the popular imagination. In addition to the American West, we speak of frontier markets, technological and scientific frontiers, and, of course, the “final frontier.” This conference asks, “What is the significance of ‘frontiers’ to Japanese history?” We will present recent and in-progress works exploring the utility of a frontier perspective to enrich our understanding of Japanese history.

4:00 pm – 4:40 pm  “Japanese American Migration and the Making of the Japanese Colonial Empire: The History of Japanese Striving Society” - Sidney Lu (University of Tennessee at Chattanooga)

The Significance of the Frontier in Japanese History: Takahashi Tomio and Frederick Jackson Turner

In the 1960s and 1970s, historian Takahashi Tomio applied Frederick Jackson Turner’s “frontier thesis” to the history of Japanese state and national formation, arguing that as the Western frontier had determined American national character, the Eastern frontier had determined the course of ancient Japanese history and the character of Japan itself. Takahashi, a scholar of Northeast Japan (Tōhoku), who attempted to transcend the limitations of Japanese history with a structural model recognizing the mutually constitutive nature of core and periphery, metropole and frontier. Takahashi’s affinities with Turner are best understood in the context of universalist tendencies in early postwar Japanese historiography. However, because Takahashi primarily hoped to write a subjective history of Tōhoku that demonstrated the mutually constitutive nature of metropole and frontier, his adaptation of Turner is fraught and lacks internal consistency. I interrogate the internal conflicts of Takahashi’s argument in light of this larger project.

RAN ZWIGENBERG
Hiroshima Frontiers: Planners, Dreamers (and the Yakuza) at the City of Peace

In 1946 Ishikawa Hideaki, one of Japan’s leading architects, was invited by Hiroshima to advise its newly founded reconstruction committee. Ishikawa told its members, “Hiroshima has a resource which cannot be easily obtained even in hundreds of years and which must be utilized for the future [and] it is vast open land.” Ishikawa’s sentiment was not exceptional in early postwar Hiroshima. The view of the destroyed city as a space of innovation and recreation was widespread at the time. Drawing on metaphors of pioneering and frontier terminology, city planners and politicians viewed the destruction of Hiroshima as an opportunity to build a new peace city and, indeed, a new society. Another place when frontier metaphors were used in Hiroshima was in the blooming black markets and crime ridden streets of the shanty towns that spread across the “atomic desert.” Hiroshima was known as Yakuza city, and was the site of the longest running gang war in postwar Japan; vividly captured in Iiboshi Kōichi’s Jingi naki Tatakai. This paper will examine these two sites of Hiroshima as a frontier town. It argues that by imposing city plans and regulations, city planners sought to reinstall not just a new symbolic and spatial order but also civic order, transferring the “Yakuza city,” as it was called, into the modern and orderly peace city they envisioned.

A War of Words: Allied Captivity and Swiss Neutrality in the Pacific, 1941-1945

I explore the work of Swiss diplomats and Red Cross delegates to explain the experience of Allied POWs and civilian internees in the Pacific War. As the only foreigners allowed into both POW and internee camps, and the only ones to work in Japan as well as Allied countries, they were uniquely positioned to record the flow of information between the two sides, the attempts to deliver material and financial aid, and the intensifying exchange of recrimination and threats. Washington and Tokyo made claims and counter-claims about the observance or non-observance of the Geneva Conventions. Both sides threatened and carried out reprisals and made their observance of international law conditional on the conduct of the enemy. While life was far worse for Allied captives than for their Japanese counterparts, it was not because of a deliberate policy of cruelty. Instead, senior Japanese officials never developed clear policy guidance for POWs and failed to provide adequate logistical and administrative support. The few Japanese officials who oversaw the camp system lacked any authority over individual commanders. Even so, by working as intermediaries between the two sides of the Pacific War, the Swiss may well have helped prevent a bad situation from becoming even worse.

SIDNEY XU LU
Japanese American Migration and the Making of the Japanese Colonial Empire: The History of Japanese Striving Society

I examine how controversy between People’s Republic of China and Republic of Korea regarding history of Koguryŏ, an ancient kingdom existed from the first century BCE until mid seventh century CE in East Asia, began and has developed. Conventional explanation of the conflict between PRC and ROK has focused on the former’s intention to include this ancient kingdom in Chinese history and the latter’s response. While acknowledging nationalism effect in dispute, this article explains Korean’s perception of Koguryŏ since late nineteenth century and the current controversy in the frame of collective memory. The purpose of this article is to demonstrate that not only nationalism but also contemporary geo-political situation inside and outside Korean peninsula contributes to Koguryŏ’s position in collective memory of Korean people.

Though originally viewed as an exotic and unhygienic foreign practice, in the past decade the consumption of sushi has become one of the most important indicators of sophistication and affluence for modern Russian consumers. While the popularity of sushi exploded around the world in the last twenty-five years, the Russian case has its own inimitable specifics. Since the 19th century, Russia has approached national cuisine as a tool of nation-building and an important factor in the articulation of Russian, Soviet, and now once again Russian national identity. Especially in Russia, where foreign travel was restricted by state regulations and distances, foreign food became an important form of encountering non-native cultures. This presentation argues that sushi has become a form of culinary tourism for Russian consumers, giving them the ability to explore other lands without leaving home. Furthermore, the Russian state continues to see foreign travel of all kinds as a potential site of physical and spiritual pollution and therefore considers sushi a disruptive foreign imposition on the still-fragile post-Soviet Russian national state and identity. Sushi therefore has become an important place of encounter, a frontier of Russia and Japan, of the Russian constructs of Occidental and Oriental traditions, of the citizen and the state.