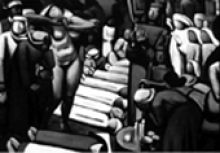 This documentary traces the trajectory of a Korean diasporic community in the former Soviet Union.  Placed in internment camps by Stalin during World War II, the plight of a generation of Korean-Russians was documented in secret by the artist Shin Sun-nam, whose epic painting ‘Requiem’ has only recently been made public.