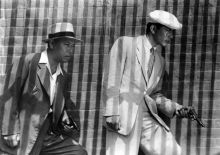 The story centers on a police detective, Murakami, whose pistol is stolen from him while he rides a trolley through Tokyo, a city still struggling to recover from the devastation of World War II. Murakami is overcome with guilt at the loss of his weapon, particularly when reports roll in that it is being used in a series of holdups, one ending fatally. Murakami devotes himself to tracking down the man who has his gun, going undercover to penetrate the seedy postwar black market and hunting down every possible lead. When Murakami finally encounters the criminal, he discovers that they share more in common than he might have imagined.

Ever since the success of the French crime film Zigomar in 1911, the Japanese film industry has produced numerous movies depicting criminals and the detectives who try to apprehend them. Chivalric yakuza, modern mobsters, knife-wielding molls, hardboiled gumshoes, samurai detectives, femme fatales, and private eyes populate Japanese cinema, from period films to contemporary dramas, from genre cinema to art film, from the work of genre auteurs like Makino Masahiro to masters like Kurosawa Akira. Cinematic representations of crime have served in Japan to draw the boundaries of society and the nation, define the nature of reason and epistemology, shape subjectivity and gender, explore the transformations of modernity, and even express the desire for political transformation. Surprisingly, little of this rich lode of cinema has been introduced abroad. This series, co-sponsored with the National Film Center of the National Museum of Modern Art, Tokyo, will present some of the masterworks of Japanese gangster film, detective cinema, and Japanese noir, in subtitled archive prints that have rarely been seen abroad. The series will conclude with a symposium featuring an international panel of experts on Japanese crime film, and a world premiere screening of a newly struck English subtitled print of the classic gangster meoldrama, CHUTARO OF BANBA. All films are in 35mm with English subtitles. This is the first of 10 films.