Home » Events » On the Transnational Destruction of Cities: What Japan and the U.S. Learned from the Bombing of Britain and Germany in World War II

On the Transnational Destruction of Cities: What Japan and the U.S. Learned from the Bombing of Britain and Germany in World War II 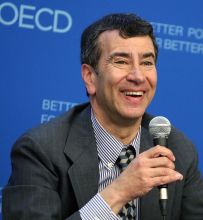 The Council is pleased to present the Nineteenth Annual John W. Hall Lecture in Japanese Studies.

How did it become “normal” to bomb cities and civilians?  Focusing on the aerial bombardment of Britain, Germany, and Japan in 1940-45, Garon spotlights the role of transnational learning in the construction of the “home front” among all the belligerents.  World War II was a global experience, yet histories of the home front remain confined to individual nations.  In reality, not only did the warring states study each other’s strategies to destroy the enemy’s home front and “civilian morale,” they also investigated others’ efforts to defend one’s own home front by means of “civilian defense.”  In this transnational world of knowledge-gathering, Japan emerged as a central player.  But it was Japan’s fate to suffer the war’s most lethal firebombing, based on what the Allies had learned from bombing European cities.

SHELDON GARON is Nissan Professor of History and East Asian Studies at Princeton University.  A specialist in modern Japanese history, he also writes transnational history that charts the flow of ideas and institutions between Asia, Europe, and the United States—notably Beyond Our Means: Why America Spends While the World Saves (2012) and “Transnational History and Japan’s ‘Comparative Advantage,’” Journal of Japanese Studies (Winter 2017).  His current project is a transnational history of “home fronts” in Japan, Germany, and Britain in World War II, focusing on aerial bombardment, food insecurity, and civilian “morale.”  Previous publications include Molding Japanese Minds: The State in Everyday Life (1997) and The State and Labor in Modern Japan (1987), and he coedited The Ambivalent Consumer: Questioning Consumption in East Asia and the West (2006).