Home » Events » Uyghur Poetry in a Time of Crisis

Uyghur Poetry in a Time of Crisis 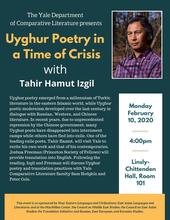 Uyghur poetry emerged from a millennium of Turkic literature in the eastern Islamic world, while Uyghur poetic modernism developed over the last century in dialogue with Russian, Western, and Chinese literature. In recent years, due to unprecedented repression by the Chinese government, many Uyghur poets have disappeared into internment camps while others have fled into exile. One of the leading exile poets, Tahir Hamut, will visit Yale to recite his own work and that of his contemporaries. Joshua  Freeman (Princeton Society of Fellows) will provide translation into English. Following the reading, Izgil and Freeman will discuss Uyghur poetry and translation practices with Yale Comparative Literature faculty Sam Hodgkin and Peter Cole.