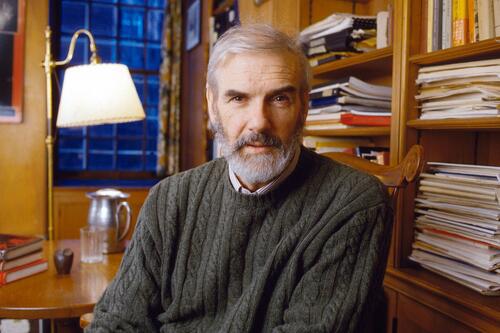 Jonathan Spence ’65 Ph.D., Sterling Professor Emeritus of History, whose scholarship shaped the field of China studies for half a century, died Dec. 25, 2021 at home in West Haven, Connecticut of complications from Parkinson’s disease. He was 85.

President Peter Salovey, noting the community’s loss, called him “unsurpassed as scholar and teacher,” and Richard C. Levin, president of Yale from 1993 to 2013, spoke of him as “a towering figure, a scholar of unique insight and imagination.”

Spence transformed and popularized the study of China in the United States and across the world. Galvanized at first by the idea of China in the 17th century, he went on to write 14 books that spanned the entirety of modern Chinese history, among them “The Search for Modern China” (1990).

His gift was to blend scrupulous archival research with literary flair to create narratives that illuminate the vibrancy of human lives in a foreign land. When he started writing in the 1960s, the American eye was not on China. With a novelist’s aptitude for character, detail, and pace, he brought the sweep of a distant civilization to life. His narrative gift made him what Peter Perdue, professor emeritus of history, called a “master craftsman” who “created a new amalgam of biography, documentary, literature, and drama.”

Born in England in 1936, Jonathan Dermot Spence was one of four children of a family immersed in art, literature, and publishing. He had his secondary schooling at Winchester, where he won the history prize. He did military service for two years in Germany and then went up to Clare College Cambridge, where he coedited the highly regarded literary magazine Granta.

Spence always said he was a “convert” to Chinese history. It was as an exchange student on a Mellon Fellowship at Yale that — after years of focusing on European history — he became mesmerized by a course on China taught by Mary Wright, who had been a student of John Fairbank at Harvard and who had recently arrived at Yale, with her husband Arthur, from Stanford. Wright became Spence’s mentor and introduced him to the distinguished bibliographer and historian Fang Chao-ying, whose support helped him gain access to papers in Taiwan from the Qing dynasty.

“Ts’ao Yin and the K’ang-Hsi Emperor: Bondservant and Master,” Spence’s Yale dissertation and first book, written with the assistance of special access to archival materials in Taiwan, created a nuanced portrait of Ts’ao Yin, the servant, spy, and bondservant to the Manchu emperor. Ts’ao Yin served as a lens for viewing the whole of Chinese society during the dynasty, animated brilliantly by Spence.

This early work, published in 1966, had all the hallmarks of what would follow: fascinating characters, rich use of detail, and an intriguing tale told with a storyteller’s art. In many other books to come, Spence succeeds, as Mark Elliott, a professor of Chinese and Inner Asian history at Harvard and former Spence student, has said, in “demystifying China and the Chinese past, and making it intelligible, relevant and meaningful to people.”

Generations of readers have wept while reading the poignant fate of Woman Wang in “The Death of Woman Wang” (1978) and become caught up in following the dramatic story of the Jesuit priest who set out from Italy to bring Christian faith and Western thought to Ming dynasty China in “The Memory Palace of Matteo Ricci” (1984). They have wondered over the fate of the Chinese widower from Canton and the way that his fate illuminated the differences between China and the West in “The Question of Hu” and sympathized with Zhang Dai who spent the second part of his life obsessively recording the texture of the vanished Ming dynasty of his youth in “Return to Dragon Mountain: Memories of a Late Ming.” In all of these books, while telling mesmerizing stories of particular people in particular circumstances experiencing complex and extraordinary events, Spence manages not only to convey a sense of China and its civilization, but also of our place as humans in the world.

Spence’s best-known work, “The Search for Modern China,” developed from the lectures in his celebrated Chinese history course at Yale, begins with the Ming dynasty and covers four centuries. It has been the cornerstone of college-level teaching of Chinese history since its publication. The term “textbook,” however, would give the wrong impression of a masterpiece in which Spence makes the search for China a quest for depicting a complex culture packed with upheaval and personalities.

For generations of students, the “Modern China” course, simply known among undergraduates as “Spence,” was considered a rite of passage for Yalies who heard from one another that it would open their eyes to a fascinating country and civilization and give them a new global perspective. So popular was it that students had to be admitted in cohorts: senior majors in Chinese, Japanese, history, and East Asian studies on day one; junior majors in the same on day two; and everyone else, as far as the room would hold, on day three. Ultimately the university gave up trying to find a classroom and the course was moved to Battell Chapel, which holds 850.

As Janet Chen, now professor of history at Princeton University, describes, “With a single sheet of hand scribbled notes, Spence could hold an auditorium of undergraduates spellbound” with lectures that were as engaging and illuminating as short stories. Another student remarked, he could “catch the essence,” as Spence sometimes himself described it, of people and of historical moments so they “lit up like lightning bugs in a jar.”

Some legendary lecturers achieve greatness through their theatricality. This was not Spence. Slowly, patiently, and in a quiet voice, he fashioned his lectures with narratives as rich as those in fiction, always embedding a larger point about the culture and society of China within them. Students would sit rapt, and then leave the lectures and excitedly discuss them over lunch in the colleges.

It would be hard to overestimate the influence of “Modern China”: from it, students who are now out in the world have gained a deeper understanding of China that has served them as journalists, politicians, ambassadors, teachers, poets, actors, entrepreneurs, and simply as knowledgeable citizens.

As one of the most influential professors of Chinese history in the world, Spence also attracted a distinguished cohort of graduate students who are now contributing to scholarship and carrying on his legacy throughout the academy — from Harvard, Princeton, and Columbia to the University of Chicago, Cornell, Dartmouth, Cambridge, the Chinese University of Hong Kong and many other colleges and universities. Immediately after he died the internet flared with remembrances of him from Chinese scholars and students at distinguished Chinese universities, including Tsinghua and Beida, where Yale has shared a Ph.D. exchange program for graduate students.

For his pathbreaking work, Spence received many accolades. He was a MacArthur Fellow and the recipient of eight honorary degrees, including those from his alma mater, Cambridge, and, in the same year, from Oxford. He was appointed to the C.M.G. (Companion of the Most Distinguished Order of St. Michael and St. George) on the Queen of England’s Birthday Honours List. He served a term as the president of the American Historical Association. In 2010 he was asked to give the Jefferson Lecture, the most prestigious honor the U.S. federal government bestows for achievement in the humanities. At Yale, undergraduates chose him for the coveted DeVane Medal for scholarship and teaching.

A popular figure in a university he loved, Spence was admired not only for his exemplary scholarship, teaching, and dedication to students, but also for his warmth, humility, and integrity. For years he had an office in Timothy Dwight College, where he was a faithful fellow. He regularly attended Yale College faculty meetings, an astute and interested observer of university politics and people. He and his wife Annping Chin, a senior lecturer in history who retired in 2018, entertained many from China and all over the world at superb dinners in their West Haven home, where they also created a beautiful garden.

In addition to his wife, Spence is survived by a brother, Nicholas; two sons from his first marriage, to Helen Alexander, Colin and Ian; a stepdaughter, Mei Chin; a stepson, Yar Woo; a grandson; and two step-granddaughters.