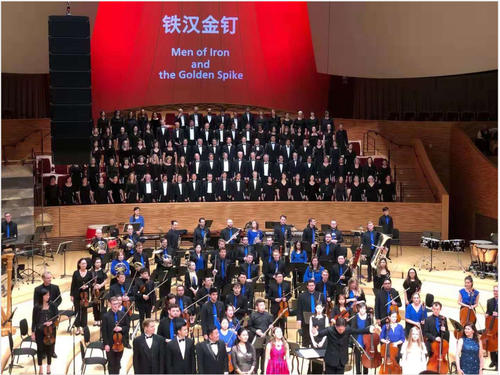 My October began with Carnegie Hall’s world premiere of “The Men of Iron and the Golden Spike.” Five days later, Stanford’s Bing Concert Hall performed it; this oratorio commemorates the 150th anniversary of the construction of the Transcontinental Railroad, whose completion relied on the blood and sweat of 15,000 Chinese workers.

Although this oratorio has particular significance to Stanford — the university’s founder, Leland Stanford, tapped the eponymous golden spike at the railroad’s opening ceremony — Yale made a large contribution to the creation of the oratorio itself.

Su Wei, a senior lector at Yale who teaches advanced Chinese language and literature, wrote the oratorio libretto for “The Men of Iron and the Golden Spike.” Or rather, he adapted his opera — written 30 years ago — to fit the oratorio format for this year’s commemoration of Chinese involvement in the Transcontinental Railroad.

The show is a beautiful performance with stunning vocals and ingenious integration of Chinese instruments and melodies within a Western-style orchestra. The oratorio is bilingual, reflecting the combination of cultures that occurred during the construction of the railroad.

Instead of a review, however, I’d like to present Su Wei’s own story behind the show’s production:

Q: What prompted you to collaborate with Stanford and Bard to adapt your original opera libretto into a much shorter oratorio piece?

A: It’s a long story. In 1984, I was a UCLA graduate student. In Orange County, there was a reception where I first learned about the Chinese involvement in the building of the Transcontinental Railroad. They made an announcement: 1984 was the first time the government formally issued a statement to give some official award to the Chinese laborers’ families. For the past 100 years, no one formally acknowledged their contributions to that historical story. That story shocked me. I never, as a young Chinese guy — I am Cantonese — I never thought my older generation in the USA did such great things. It was a great job. My ancestors made such great contributions, but no one knows it. I tried to research this piece’s history. After that, I went to Harvard University as a visiting scholar. I went from the Harvard-Yenching Library to New York’s Chinatown Chinese Museum to find some material. In 1986, I finished the first opera script. The Central Chinese Opera House and the Shanghai Opera House were interested, but for many reasons, they didn’t do anything. For a long time, this script was in the bottom of my luggage. In 2001, Yale performed my cantata about Shandong Yu — English: Ask the Sky and Earth. It was a big cantata — it became a popular piece. The whole U.S. — 10 cities performed this one-hour musical piece — Sydney, Frankfurt and the whole world performed this piece.

This cantata was performed in California’s Silicon Valley, conducted by Cai Jindong in 2013. He told me Stanford had a project for which they wanted me to do a musical piece about this part of  history. He wanted me to be a lyricist. I said “easy job” — years ago, I wrote the opera. At that time it was 2015. I flew to see Professor Gordon H. Chang. I was already done with the song, Coolie Song, sung in Cantonese. I sang to him my piece. He said he knew the song from his grandfather. This song was sung in the workplace. We used the two most important pieces of music: Moonlight, a children’s folk song, and The Coolie Work Song.

I just came back from Stanford and Carnegie Hall. The show was very successful: All tickets sold out. Eighty percent of the audience came to tell me that they were all in tears — moved, touched. They felt that it was very worth it. Zhou Long, the composer, had a tough job adapting the libretto into a musical composition — I had the easy job. The Yale Chinese Chorus conductor Charles Lu made a big contribution to this piece because choral rehearsals and preparation took a lot of time.

Q: Which scenes from the original opera, if any, do you wish made it into the final oratorio libretto?

A: An opera needs a lot of money and a lot of jobs. The oratorio is easier. It’s especially easier for a chorus to sing Shan Dong Yu in an oratorio. This oratorio used very pretty but simple — easy to sing — melodies. We told a touching story because so many died. Over 3,000 people died in that engineering project — no one knew them, no one mentioned them. I want this work to face history.

Many audience members came to me and said, “You did a job for America and for China,” and for that reason I feel that my 30 years’ dream has come true. I came up with this piece 40 years ago and now it has a good conclusion.

Q: As a professor at Yale, do you think that your experience as a teacher has impacted your writing style or the way you convey artistic ideas?

A: I have always appreciated being able to make such a great contribution at Yale. Teaching Chinese gave me some support. It let me know I need to do something good for China and America, two great nations’ people. That’s my purpose from Yale: to serve both cultures.