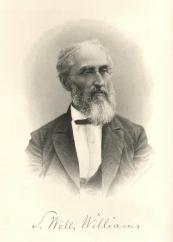 Samuel Wells Williams 衛三畏 (1812-1884) was a noted linguist, official, missionary and Sinologist from the United States.  Williams went to China in his twenties, where he was involved in a variety of missionary and teaching projects. He was fluent in Chinese and once worked for the American Board of Commissioners for Foreign Missions.  While in China, Williams wrote the influential book entitled An English and Chinese Vocabulary in Court Dialect (published in 1844).  In China, Williams was also involved in the Western efforts to open Japan.  He participated in the voyage of the ship Morrison to Okinawa and on to Japan in 1837 and in 1854, he participated in the Perry Expedition to Japan.

In 1877, he came back to the United States and was appointed by Yale University to teach Chinese.  For this reason, Yale has been credited as the first American institution to offer courses in Chinese.  (For more information concerning Samuel Wells Williams, see Frederick Wells Williams, The Life and Letters of Samuel Wells Williams, [New York and London, 1889], as well as other sources in the Yale University Manuscripts & Archives.) To learn more about current offerings in Chinese language and literature at Yale please visit the Department of East Asian Languages and Literatures.