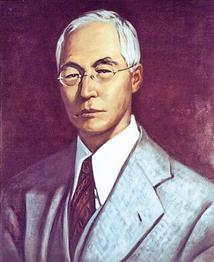 Asakawa Kan’ichi was born in 1873 in Nihonmatsu, Fukushima, Japan, and graduated from Tokyo Senmon Gakko (Waseda University).  Asakawa continued his education in the United States and received his B.A. from Dartmouth College in 1899 and his Ph.D. in History from Yale University in 1902. Having seen how little Japan was understood in the United States at the turn of the century, Asakawa decided to dedicate his life to the enhancement of mutual understanding between Japan and the United States. This he did through a lifetime of devotion to scholarship while teaching first at Dartmouth College (1902-1906) and then at Yale University from 1907 to 1942.

Dr. Asakawa’s scholarship as a pioneering institutional historian of Japan and a comparative historian became widely known through such works as The Early Institutional Life of Japan: A Study in the Reform of 645 A.D. (1903 and 1963), The Documents of Iriki (1929 and 1935), and The Land and Society in Medieval Japan (1965).

Dr. Asakawa also served the Yale University Library as curator of the East Asian Collection from 1907 to 1948. While on a trip to Japan in 1906-1907, he acquired 8,120 titles in 21,520 volumes of Japanese library materials for Yale University as well as 3,160 titles in 45,000 volumes of similar materials for the Library of Congress, thereby building the foundation for Japanese research collections at both institutions.  In addition, Asakawa was instrumental in the selection and donation of another important group of rare Japanese works, the Yale Association of Japan Collection, which was acquired in the 1930s.

Another dimension of Dr. Asakawa’s contributions may be seen through his involvement in current affairs. During and after the Russo-Japanese War of 1904-1905, he was actively engaged in an effort to explain to the American public the international situation in East Asia through numerous speaking engagements and articles in both scholarly and popular journals. For example, he published The Russo-Japanese Conflict: Its Causes and Issues (1904) and Nihon no Kaki (Crisis for Japan, 1909). Through the years he continued to carry on an astounding volume of correspondence with many leading Japanese in literary, political, and scholarly circles, as well as with his many friends in the United States. He never ceased to speak his conscience; he judged the two countries he loved, Japan and the United States, by the highest of moral standards, as he conducted his own life.

Dr. Asakawa’s last venture in the field of personal diplomacy was an attempt to help prevent the outbreak of World War II in the Pacific. Joining with Dr. Langdon Warner, a noted Japanese art specialist at Harvard University, he drafted an appeal to the Emperor of Japan which he hoped President Franklin Roosevelt would send under his signature. Warner spent two days in late November of 1941 presenting the Asakawa Draft through a number of channels in Washington, while the President was in Warm Springs, Georgia. President Roosevelt did send a letter; but, by the time it finally reached the Emperor, Japanese warplanes had already taken off on their way to Pearl Harbor.

“I can understand how painful these days must be for you and I write merely to tell you of my understanding and to assure you of my intense desire to do all that I can to make them a little easier. You can count upon the appreciative affection of your friends. All that lies in the power of the university will be done to keep your external life normal; anything that any one of us can do to ease the spiritual load you carry or shall want to do. Yale can never repay with any adequacy your service to her and to scholarship.”

Dr. Asakawa was known in Western academic circles as a world class historian. In recent years, he has also become popularly recognized in Japan through the publication of a monographic biography and a series of research articles on his life and scholarship, as well as a massive collection of his letters. Asakawa’s grave in Grove Street Cemetery is visited every year by many travelers from Japan.

As part of the centenary celebration of Dr. Asakawa’s appointment to the faculty of Yale University, the Japan & Yale Twenty-First Century Initiative was developed to further promote exchange between Yale and Japan.  From March 9-10, 2007, the Council on East Asian Studies co-sponsored an international conference at Yale University with the Japan Foundation Center for Global Partnership in honor of Asakawa’s memory entitled Japan and the World: Domestic Politics and How the World Looks to Japan.  The conference was followed by the spring 2008 publication of the second volume of the CEAS Occasional Publication Series entitled “Japan and the World: Japan’s Contemporary Geopolitical Challenges – A Volume in Honor of the Memory and Intellectual Legacy of Asakawa Kan’ichi,” which was edited by Frances Rosenbluth (Yale University) and Masaru Kohno (Waseda University). 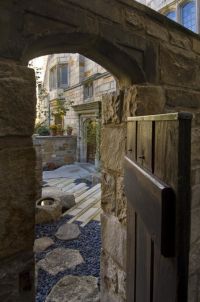 During the summer of 2007, a Komonjo/Kuzushiji Workshop was conducted at Yale for the study of Japanese paleography showcasing the maps, books, scrolls, manuscripts, and other materials that Asakawa purchased, received as donations, or had copied for Yale by specially trained scribes which form the nucleus of the Japanese collection in the East Asia Library and the Japanese works in the Beinecke Rare Book and Manuscript Library.

In addition, the Kan’ichi Asakawa Garden was created at Saybrook College in 2007. The Japanese-style garden, designed by Shin’ichiro Abe of Zen Associates of Boston, is located within Killingworth Courtyard of Saybrook College, where Asakawa was a resident faculty fellow in the 1930s. The formal dedication ceremony, jointly planned by the Office of International Affairs and the Council on East Asian Studies, took place on October 12, 2007. Ryozo Kato, then Japan’s Ambassador to the United States, spoke at the dedication, which also featured remarks by Linda Koch Lorimer, Vice President and University Secretary, and other dignitaries. Edward Kamens, the Sumitomo Professor of Japanese Studies, chaired the garden planning committee, which included faculty, staff and students. The garden was created through the generosity of Asakawa Kensho Kyokai (Asakawa Peace Association), Waseda University, Yale alumnus Charles Schmitz (1960 B.A., 1963 LL.B.) and many other donors.