Home » Events » Against the Odds in Asia, 1901-2021: Thoughts on the Activists, Autocrats, Exiles and Empires of Several Eras

Against the Odds in Asia, 1901-2021: Thoughts on the Activists, Autocrats, Exiles and Empires of Several Eras 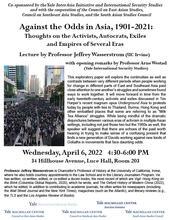 This exploratory paper will explore the continuities as well as
contrasts between very different periods when people working for change in different parts of East and Southeast Asia paid close attention to one another’s struggles and sometimes found ways to work together. It will move forward in time from the early twentieth-century activists and exiles discussed in Tim Harper’s recent magnum opus Underground Asia to protests today by people with ties to Thailand, Burma, Hong Kong and other embattled places that some are referring to as “Milk Tea Alliance” struggles. While being mindful of the dramatic disjunctures between various eras of activism in multiple Asian settings, including not just those two but the 1980s as well, the speaker will suggest that there are echoes of the past worth hearing in trying to make sense of a confusing present that finds a new generation of Davids working against new kinds of Goliaths in movements that face daunting odds.

Professor Jeffrey Wasserstrom is Chancellor’s Professor of History at the University of California, Irvine, where he also holds courtesy appointments in the Law School and in the Literary Journalism Program. He has written, co-written, edited, or co-edited a dozen books, the most recent of which are Vigil: Hong Kong on the Brink (Columbia Global Reports, 2020), which he wrote, and The Oxford History of Modern China (2022),
which he edited. In addition to contributing to academic journals, he often writes for newspapers (including the Wall Street Journal and the New York Times), magazines (such as the Atlantic), and literary reviews (e.g., the TLS and the Los Angeles Review of Books).

Co-sponsored by the Yale InterAsia Initiative and International Security Studies