Home » Events » From Chernobyl’s Past to Fukushima’s Remembered Future

From Chernobyl’s Past to Fukushima’s Remembered Future 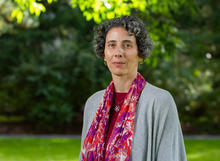 This talk examines recent remembrances of the Chernobyl accident in popular culture as a means to consider how the Fukushima accident will be remembered in another twenty years, and how Japanese fiction writers have already been trying to imagine that very future. The Chernobyl accident has acquired newfound visibility in the US through the recent HBO miniseries Chernobyl and the Netflix German TV show Dark. In Japan, the Fukushima accident spurred a wave of literary responses, and this talk looks to the fictional stories of contemporary writers, both elite and popular, including Tawada Yōko, Yoshimura Man’ichi, Tsushima Yūko, Kirino Natsuo, and others. The talk is structured by a series of binaries—fact/fiction, spectacle/slow violence, rupture/cyclical futurity—that put the Chernobyl and Fukushima accidents into dialogue, as a means to examine the collective imaginings of Fukushima’s afterlife.

Rachel DiNitto is a Professor of modern and contemporary Japanese literary and cultural studies in University of Oregon’s East Asian Languages & Literatures department. Her current research focuses on the literary and cultural responses to the disaster of March 11, 2011 in Japan. In addition to her new book, Fukushima Fiction: The Literary Landscapes of Japan’s Triple Disaster (2019), she has published on the film and manga of this disaster and postwar Japan.

In the academic year 2000-2001, the Council on East Asian Studies at Yale University inaugurated a program of “McClellan Visiting Fellows in Japanese Studies,” in honor of our colleague Edwin McClellan, Sterling Professor Emeritus of Japanese Literature.  Rather than a conventional lectureship, the program is intended to invite to campus distinguished Japan scholars for an opportunity to discuss their recently completed projects and/or manuscripts with faculty and students at Yale.  Typically a Fellow stays for a couple of days and offers a seminar based on his/her new work.  We also hope that the Fellow will offer a public lecture (on any topic) and be available to meet with interested undergraduates and graduate students.  We have envisioned the program as an opportunity to expose our students (and ourselves) to some of the best new Japan scholarship.  We hope too that the occasions for discussion and feedback may also be of value to the Fellows themselves in bringing their own projects to fruition.