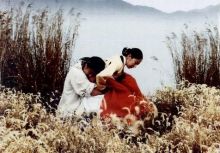 Winner of the Cannes Film Festival’s Best Director award, CHIHWASEON is a vivid portrait of the turbulent life and times of Korea’s greatest artist. As remarkably embodied by Choi Min-sik (Old Boy), the temperamental, passionate brush master Jang Seung-up paints with a martial artist’s fervor while indulging a rock star’s single-minded lust for life. Amidst the tumult and destruction of nineteenth century Korea, “Ohwon” as he comes to be called, fights to escape both the rigid artistic boundaries and the social fetters that would deny his low-born, unschooled genius.

While Ohwon’s brush tugs at paper inside the quiet of Seoul’s most privileged homes, out on the street the flames of revolution are fanned by the Japanese and Chinese generals who would claim Korea for their own. In CHIHWASEON, director Im Kwon Taek portrays both the near apocalyptic upheaval of turn of the century Korea and the intimate interior battle between Ohwon’s creative and libidinous desires with “the very elegance and mastery of the painter himself.”(The Washington Post)