Continuing Legacies of the San Francisco System: Past, Present, and Future Options 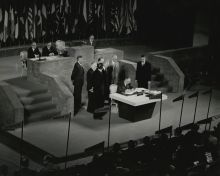 The Treaty of Peace with Japan, commonly known as the San Francisco Peace Treaty, was signed on September 8, 1951 in San Francisco, and came into force on April 28, 1952.  This post-World War II settlement with Japan, prepared and signed against the backdrop of the intensifying Cold War, fell far short of settling outstanding issues at the end of the war or facilitating a clean start for the “postwar” period in East Asia. Rather, various aspects of the settlement were left equivocal. The  peace treaty, which largely determined Japan’s position in the post-war world, along with the US-Japan security treaty signed on the same day, left negative legacies of “unresolved problems,” and continue to significantly affect regional international political and security relations.  Today, the countries and peoples of East Asia are still deeply divided by history, politics, and unsettled borders, even though they have become much closer in their economic, cultural, and other relations. Taking the “San Francisco System” as its conceptual grounding, this presentation traces origins and developments of these regional conflicts in the context of the post-World War international order and its transformation in East Asia.  In light of their multilateral origins, particularly the unresolved territorial problems involving Japan and its neighbors, it explores ideas for multilateral settlements that could lead the region toward reconciliation through greater regional cooperation and community building.

Kimie Hara is a Professor and the Renison Research Professor at the University of Waterloo (Canada), where she is also the Director of East Asian Studies at Renison University College.  She specializes in modern and contemporary international relations of the Asia-Pacific region, border studies, Cold War history, and Japanese politics and diplomacy. Her (authored/edited) books include San Francisco System and Its Legacies: Continuation, Transformation and Historical Reconciliation in the Asia-Pacific (2015), China-Japan Border Disputes: Islands of Contention in Multidisciplinary Perspective (2015, with Tim Liao, Krista Wiegand), East Asia-Arctic Relations: Boundary, Security, and International Politics (2014, with Ken Coates), Northern Territories, Asia-Pacific Regional Conflicts and the Åland Experience: Untying the Kurillian Knot (2009, with Geoffrey Jukes), ”Zaigai” nihonjin kenkyusha ga mita nihon gaiko (2009, in Japanese), Cold War Frontiers in the Asia-Pacific: Divided Territories in the San Francisco System (2007, 2012), Sanfuranshisuko heiwajoyaku no moten (2005, 2012, in Japanese), and Japanese-Soviet/Russian Relations since 1945: A Difficult Peace (1998).