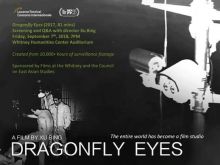 XU BING is a Chinese-born artist whose artistic and cultural interventions touch on the fields of public and ecological art, printmaking, new media installations, drawing and sculpture. Professor Xu Bing resides both in the US (since 1990) and Beijing, where he served as Vice President of China’s Central Academy of Fine Arts (CAFA). He is currently an A.D. White Professor-at-Large at Cornell University.

DRAGONFLY EYES is an 81-minute fictional film made entirely out of surveillance footage. It tells a story deeply rooted in today’s reality, revealing the “invisible” crises hidden in our mundane lives, and the inexplicable turns of events that lie beyond our grasp. The film reflects fragile sensibilities in our private emotions, and it mirrors how anxiety and insecurity fog our own perspective on modern live.

“I’ve wanted to make a film from surveillance footage since 2013, but I had no access to the necessary resources. Since 2015, surveillance cameras in China have been linked to the cloud database: countless surveillance recordings have been streamed online. So I took up the project again. Our team collected a huge amount of footage and tried to use these fragments of reality to tell a story.”

Each of us is captured on surveillance cameras, on average, 300 times a day. These all-seeing “eyes” observe Qing Ting too, a young woman, as she leaves the Buddhist temple where she has been training to become a nun. She returns to the secular world, where she takes a job in a highly mechanized dairy farm. There, Ke Fan, a technician, falls in love with her, breaks the law in an attempt to please her and is sent to jail. On his release, he can’t find Qing Ting and looks for her desperately until he figures out that she has reinvented herself as the online celebrity Xiao Xiao. Ke Fan decides to revamp himself.

In 1999, Xu Bing was awarded a MacArthur Fellowship in recognition of his “capacity to contribute importantly to society, particularly in printmaking and calligraphy.” In 2003, he was conferred the 14th Fukuoka Asian Culture Award for his “contribution to the development of Asian culture”. In 2004, he won the first Artes Mundi Prize in Wales. In 2006, the Southern Graphics Council conferred on Xu Bing its lifetime achievement award in recognition of the fact that his “use of text, language and books has impacted the dialogue of the print and art worlds in significant ways.” In 2015, he was awarded the 2014 Department of State-Medal of Arts for his efforts to promote cultural understanding through his artworks.

Sponsored by Films at the Whitney and the Council on East Asian Studies
Tags:
Film
Region:
China