Film Screening of The Street Without Sun (1954) 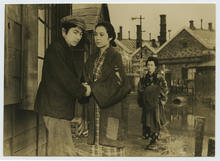 A large-scale on-set agitprop drama based on a classic novel about a real-life labor struggle at a printing factory in 1926. The title refers to tenement houses that received no sunlight, by a sewage river in Shitamachi. An independently-produced epic, featuring 50,000 people on screen, follows two romances amidst the passionate struggle against oppressive forces.