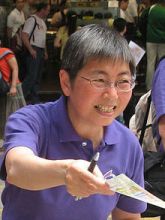 Hong Kong was returned to China in 1997 under the Sino-British Joint Declaration in May 1985 which guaranteed the continuation of the rule of law and development of democracy after the handover.  The rule of law was widely recognized as essential to the prosperity and stability of Hong Kong, and the protection of the basic rights and freedom of its inhabitants.  But the rule of law safeguarded by an independent Judiciary is alien to the Chinese system under the rule of the Communist Party.  How long would the independence of a Judiciary which does not hesitate to overrule the executive be tolerated?  Would political pressure be brought to bear on the Courts?  How would the Courts respond to pressure?  Since the handover, a series of disquieting events took place.

In June 1999, a decision of Hong Kong’s Court of Final Appeal in favor of the rights of the children of Hong Kong residents born in China was overturned by an Interpretation of the Standing Committee of the National People’s Congress (NPCSC).  Further NPCSC Interpretations were made in 2004, 2005 and 2011, the last of which at the referral of the Court of Final Appeal.  Most recently, in June 2014, China published a White Paper in which the Judiciary was described as part of those who “administer” Hong Kong, with a responsibility of implementing the Basic Law to safeguard China’s sovereignty, security and development interests.  In December 2014, when the House of Commons in Britain debated on the implementation of the Joint Declaration, a Chinese diplomat told a M.P. that the Joint Declaration was “void”.  Echoing this, a HKSAR official told the Legislative Council that the policies China promised to implement in Hong Kong after the handover were not part of the bilateral agreement and not binding as an international treaty.  Meanwhile, the development of democracy has been stalled.

Upon the NPC’s announcement on 31 August 2014 of a tightly controlled method of election of the Chief Executive, accumulated frustration erupted in a civil disobedience movement of unprecedented size and duration which the world media has dubbed “Umbrella Revolution” and which, to avoid Beijing’s retribution, the protesters preferred to call “Umbrella Movement”.  The handling of the civil disobedience movement raised questions on the rule of law, police power and the role of the courts.  Government and protesters have denounced each other for undermining the rule of law.  The survival of the rule of law in Hong Kong is vital not only to those who live or do business in Hong Kong but impacts on China, as progressive people in China push for the development of the rule of law in their homeland.  Against this background, this talk will address the issue of the rule of law in Hong Kong under Chinese rule.

Margaret Ng is a barrister in private practice, having been called to the Bar in Hong Kong in 1988.  She received her law degree from the University of Cambridge and PCLL from the University of Hong Kong.  She holds a doctorate in philosophy from Boston University.  She received her bachelor’s and master’s degrees in philosophy from the University of Hong Kong. She was formerly a Member of the Legislative Council of the HKSAR representing the Legal Functional Constituency.  First elected in 1995, she stepped down in 2012, after serving the public for 17 years as a legislator.  She has a long list of past service in public committees including the Central Policy Unit (1989 – 90) and the Operation Review Committee of the ICAC (1999 – 2004). She is also a noted commentator and writer in both English and Chinese.  She was appointed Deputy Editor-in-Chief of Ming Pao Daily news from 1986 – 1987, and its Publisher in 1988 – 1990.  She is the author of more than 12 Chinese titles.  She continues to contribute to the media regularly.