Home » Events » Japanese Culture and the Appreciation of Byōbu

Japanese Culture and the Appreciation of Byōbu 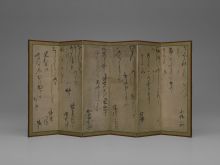 *Please note this talk will be in Japanese with English Interpretation*

Mr. Shimatani’s talk is in conjunction with the Yale University Art Gallery’s exhibition “Byōbu: The Grandeur of Japanese Screens” to be held from February 7 to July 6, 2014. He will discuss the historical development of art appreciation in Japan by tracing the formats – from ancient calligraphic writing on wooden and bamboo slabs found in archaeological sites, to hand scrolls, albums and books of varied forms; followed by hanging scrolls and then finally byōbu folding screens, one of the last formats to be developed. Since byōbu were expensive to construct, often the best artists of the period were commissioned to produce them using valuable materials. The unique characteristic of the byōbu format was that it developed in relationship with architecture, incorporating not only functional space but also intangible space. Byōbu were displayed at religious temples and shrines, in public spaces like castles to impress visitors and coerce enemies, and in private residences to secure privacy. They embodied the metaphysical concept of demarcating inside space from outside. Their zigzag placement format created a three-dimensional space using a two dimensional object. Mr. Shimatani will talk about Waka Byōbu a calligraphic byōbu in the exhibition, which was brushed by a court noble called Konoe Nobutada in the early seventeenth century. Mr. Shimatani will elucidate Nobutada’s masterful writing of aristocratic waka poems in unprecedentedly large kanji characters and kana letters. The Waka Byōbu, a recent acquisition of the Yale Art Gallery, will be on display during the first of three installations: “Tales and Poems in Byōbu”, from 2/7 – 3/23; “Brush and Ink in Byōbu,” from 3/25 – 5/11; and “Nature and Celebration in Byōbu”, from 5/13 – 7/6.

Mr. Shimatani Hiroyuki is the Executive Vice Director of the Tokyo National Museum and one of the top scholars of Japanese calligraphy in the world. His numerous publications and exhibitions cover just about every aspect of Japanese art: from Nara sutra to modern calligraphy; from Heian aristocratic writing to literati calligraphy; and from Japanese-style Wayo calligraphy of the Heian period to the very masculine Chinese Northern Wei Dynasty calligraphy which was revived in the twentieth century. This is Mr. Shimatani’s first visit to Yale University, the Yale University Art Gallery, the Beinecke Library, and the Sterling Memorial Library.