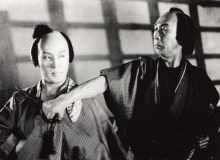 One of the unique pleasures of Japanese film culture is that all silent films were shown with a benshi, a figure who stood next to the screen explaining the film and essentially dubbing the dialogue. The benshi Kataoka Ichirō preserves this rare verbal art by traveling the world and narrating the masterpieces of Japanese film.

Kataoka will perform for Yale audiences Jirōkichi the Rat, one of the few surviving silent films of the pioneer master of the Japanese samurai movie, Itō Daisuke. This features the great Ōkōchi Denjirō playing Jirōkichi, the legendary thief with a heart of gold.

Kataoka will narrate in Japanese with accompanying English subtitles. The feature will be preceded by the American silent film It’s a Gift, a 1923 Snub Pollard slapstick comedy short.