Home » Events » A Journey to freedom

A Journey to freedom 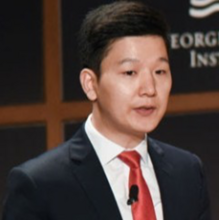 Recounts of his fight to survive in North Korea, his path to China and America. His current work on North Korea at the Bush Institute.

Joseph Kim is an Associate and Expert-in-Residence on the Human Freedom Initiative at the George W. Bush Institute. He was born and raised in North Korea. At the age of 12, his father died of starvation, and he was separated from his mother and sister.

In 2006, Joseph escaped North Korea and went to China. In China, he connected with an international NGO called Liberty in North Korea (LiNK). A year later, he left China for the United States and claimed refugee status under the North Korean Human Rights Act, signed by President George W. Bush in 2004.

In 2013, Joseph delivered a TED Talk on the importance of hope and published a memoir, “Under the Same Sky”. Joseph interned as a research assistant at the Center for Strategic and International Studies (CSIS) Korea Chair. He is a former America Needs You Fellow and Council of Korean Americans PSI Intern.

He completed a B.A. in political studies from Bard College and published a thesis titled, “Marketization in North Korea is Corrupting the Corrupted”.