Life, Medicine, and Religion in Korea and Southeast Asia 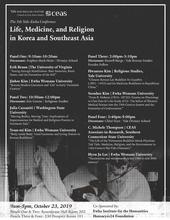 The 5th Yale-Ewha Conference invites a group of eight scholars working on the interconnection of life, medicine, and religion in Korea and Southeast Asia. Following upon last year’s conference which focused on ecology and environmental issues, this conference turns to the topic of life, religion, and medicine. Special attention will be given to the following issues: how religions define the word “life as well as the meaning of life; the ethical frameworks religions develop for living this life; the ways in which religions exhort human beings to understand their existence; what religions teach about transforming oneself, uphold or embody the ideals of that religion; the connection between medicine and life in achieving religious ideals; specific medical practices from religious traditions implemented in the modern era that maximize human potential physically, psychologically, soteriologically, and salvifically. Scholars will provide insights on the complexities of these questions by drawing from their expertise in literature, history, and medical science. Through in-depth conversations, the conference will ultimately imagine a theoretical framework in which to locate the role of religion in the relationship between life and medicine in the increasingly secularized societies of Korea and Southeast Asia.

Erik Braun (University of Virginia), “Seeing through Mindfulness: Bare Attention, Brain States, and the Formation of the Self.”

Seonhee Kim (Ewha Womans University), “From B. Hobson (1816–1873)’s Treatise on Physiology to Choi Han-ki’s the Study of Gi: The Influx of Western Medical Science into the 19th Century Joseon and the Extension of Confucianism”