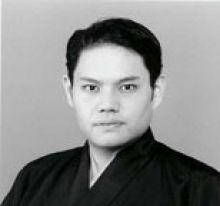 An introduction to the performance styles of modern kabuki stars Sakata Tōjūrō and Bandō Mitsugorō X. Performer and scholar Nakamura Gankyō offers a lecture comparing the kata and kaishaku, or “form” and “interpretation,” of famous scenes in the play Maiden at Dōjoji Temple (Musume Dōjōji). The lecture will conclude with a dance-performance.

Nakamura Gankyō was born and raised in Southern California. He started his Nihon Buyō (Japanese Classical dance) training at the age of three from the Bandō School of Japanese Classical dance. As a young performer, Gankyō traveled through out the United States, introducing Nihon Buyō at various Matsuri, or Japanese festivals, and other multicultural events. At the age of seventeen, Gankyō attained his natori (masters degree) from the ninth headmaster and Kabuki actor, Bandō Mitsugorō. He was awarded the name of Bandō Hiroshichirō. At the age of twenty-six, Gankyō was awarded his shihan (professor’s degree) from Bandō Mitsugorō X.

Upon graduation, Gankyō was accepted to be the youngest member of the Chikamatsu-za Troop, and was apprenticed to the National Living Treasure Nakamura Ganjirō III, now Sakata Tōjūrō IV. He became the first non Japanese citizen to be accepted into the professional ranks of Kabuki in the theater’s history. Tōjūrō award him with the name of Nakamura Gankyō (the “gan” from Ganjiro, and “kyo” from Kyoto). As a professional Kabuki actor, Gankyō has performed in all of the major Kabuki theaters throughout Japan. He has traveled internationally to England, China, Korea, India and the United States. He has held work shops, demonstrations, and lectures, and also accompanied his master Tōjūrō on various performances in those countries. While working in both the television and film industry, he is currently a PhD Candidate at UCLA in the Department of Asian Languages and Cultures, and also teaches Japanese Classical dance through California. He was chosen as a Fulbright Scholar for 2013-2015 as a Researching scholar at Waseda University and Tokyo University.