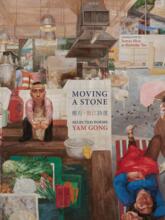 Born in 1949, Yam Gong (pen name of Lau Yee-ching) is widely respected in both experimental and traditionalist circles in Hong Kong’s literary community. The first book-length collection of Yam Gong’s poems in English, this volume draws primarily from his most important work to date, And So Moving a Stone You Look at Festival Lights along the Street, published in 2010.

The co-translators will discuss selected poems, consider Yam Gong’s use of wordplay, and explore the challenges and pleasures of rendering his poems in English.

James Shea is the author of two poetry collections, The Lost Novel and Star in the Eye, both from Fence Books. Recipient of grants from the Fulbright U.S. Scholar Program, Hong Kong Arts Development Council, and National Endowment for the Arts, he is the director of the Creative and Professional Writing Program at Hong Kong Baptist University.

Dorothy Tse is a Hong Kong fiction writer whose books include Owlish and So Black. Tse has received the Hong Kong Book Prize, Unitas New Fiction Writers’ Award (Taiwan), and the Hong Kong Award for Creative Writing in Chinese. She has been a resident at Art Omi, the University of Iowa’s International Writing Program, and the Vermont Studio Center.