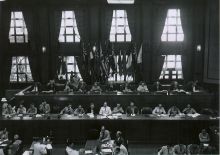 A special dialogue on new research about the Tokyo War Crime Trials by Professor David Cohen and Professor Yuma Totani.

Readings have been prepared for this event. Please email eastasian.studies@yale.edu for copies.

Professor David Cohen is Director of the WSD HANDA Center in Human Rights and International Justice at Stanford University, where he is also a Distinguished Visiting Fellow at the Hoover Institution. He is Professor of Law at the University Of Hawaii School Of Law, where he co-directs the Center for ASEAN Law and Integration.   He taught at UC Berkeley from 1979-2012 as the Ancker Distinguished Professor for the Humanities and the founding Director of the War Crimes Studies Center (which moved to Stanford as the WSD HANDA Center in 2013). He now holds the title of Professor in the Graduate School at UC Berkeley.

Since 2000 he has collaborated on human rights and judicial reform projects in Asia with the East-West Center in Honolulu, a federally funded Asia-Pacific research center. There he serves as Director of the Asian International Justice Initiative (AIJI) and as Senior Fellow in International Law. As Director of the WSD HANDA Center and AIJI, Cohen leads a wide range of human rights, international justice and judicial reform projects in Southeast Asia, Bangladesh, Sierra Leone, the former Yugoslavia, and Rwanda. He has worked with the Supreme Court of Indonesia since 2003 on judicial training, law reform, human rights, and conflict mediation projects.  Other partnership projects include the Khmer Rouge Tribunal in Cambodia, UNESCO and the Ministry of Culture in Cambodia, the Special Court for Sierra Leone, the ICTY, and other institutions in Asia and Africa.  From 2006-2008 he served as the International Expert Advisor for the Commission on Truth and Friendship established by the governments of Indonesia and Timor-Leste. He is one of the founders and is currently the Advisor for the Human Rights Resource Center in Jakarta, where he co-directs projects on key human rights issues in ASEAN such as human trafficking, religious freedom, rule of law reform, and business and human rights. Since 2011 he has worked with USAID and the ASEAN Secretariat to promote judicial cooperation in ASEAN related to the creation of the ASEAN Economic Community. Prof. Cohen holds a PhD in Classics/Ancient History from the University of Cambridge, a JD from the UCLA School of Law, and an Honorary Doctorate in Law from the University of Zurich.

Yuma Totani earned her Ph.D. in history at the University of California, Berkeley, in 2005, and is currently an associate professor of history at the University of Hawaii. She authored The Tokyo War Crimes Trial: The Pursuit of Justice in the Wake of World War II (Harvard University Asia Center, 2008) and produced its expanded Japanese-language edition, Tōkyō saiban: dai niji taisen go no hō to seigi no tsuikyū (Misuzu shobō, 2008). Her second book, Justice in Asia and the Pacific Region: Allied War Crimes Prosecutions (Cambridge University Press, 2015), is forthcoming.

Image from the National Archives and Records Administration