Home » Events » A Poetics of Ambiguity: Japanese Cryptography at the Crossroads of Text and Image

A Poetics of Ambiguity: Japanese Cryptography at the Crossroads of Text and Image 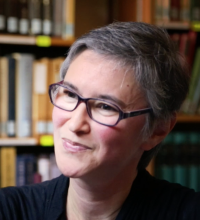 Japanese visual culture is characterized by multifarious and highly complex relationships between text and image, to such an extent that they would interfere with Ernest Fenollosa’s attempt to define the so-called idealistic art of Japan in the late 19th century. It is Professor Brisset’s aim in the present paper to discuss some of those intersemiotic devices, with an emphasis on the cryptographic tradition. A unique phenomenon in the Far East, it displays writing characters deliberately hidden in paintings or lacquerwares so as to allude to a text (a poem, be it Chinese or Japanese, or a Buddhist excerpt). Quite popular among the imperial and warrior elites, such images require specific skills on both sides, that of the designer—who has to decide what part of the referent is to appear as a linguistic sequence or as a pictorial element—and that of the viewer whose very first task is to detect the graphic tokens themselves, not to mention the interpretation of the work as a whole. At a formal level, the degree of the encryption makes the decipherment more or less difficult, and at a functional level, the result of the choices made by the creator of the piece reveals his personal interpretation of the original text for the reader to appreciate—when his hermeneutic quest is successful. This silent dialog between the designer and the viewer through the cryptographic strategies of such images cannot be satisfactorily addressed unless one undertakes a thorough analysis of the relationships between those ingenious devices (sometimes even not yet deciphered) and the text they are based on. The mastery and astute use of graphic codes and iconic conventions during the classical and medieval period have enabled the elaboration of semiotic devices whose subtlety challenges now contemporary scholars, even in Japan.

Claire-Akiko Brisset, Associate Professor in Japanese Language and Culture, received her Ph.D. in Japanese Studies in 2000 from Paris Diderot University. Her research focuses on Japanese Cultural History and deals with a wide array of documentary fields (from medieval manuscripts to contemporary cinema), with an emphasis on relationship between text and image. Her work is highly influenced by anthropological history and semiotics. She is the author of À la croisée du texte et de l’image : paysages cryptiques et poèmes cachés (ashide) dans le Japon classique et médiéval (Collège de France, 2009) which addresses Japanese cryptographic expression from classical to medieval period. For the very first time in a European language, this study aims at establishing hermeneutic and intersemiotic patterns through an extensive overview of the pictorial and calligraphic corpus. She is also co-editor of numerous books dealing with Japanese epic, writing history and culture, visual culture, and co-translator of major Japanese classical texts (Shaka no honji, Mumyōshō, Shuhanron emaki, etc.), as well as contemporary Japanese scientific literature (Tsuji Nobuo, Mita Munesuke, etc.). Her current book project deals with the discourses on writing and painting in classical Japan through the analysis of narratives (like the Kokon chomon-jū collection).