Home » Events » Refusal as Political Practice: An Ethnography of Citizenship and Refugee Status

Refusal as Political Practice: An Ethnography of Citizenship and Refugee Status 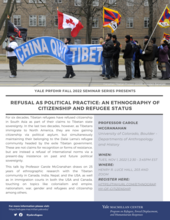 Please note this talk will take place in person and on Zoom. Please register here for Zoom

Is it possible to be both a refugee and a citizen? For six decades, Tibetan refugees have refused citizenship in South Asia as part of their claims to Tibetan state sovereignty. Tibetans therefore live in India and Nepal as refugee non-citizens, either undocumented or under-documented for multiple generations. In the last two decades, however, as Tibetans immigrate to North America, they are now gaining citizenship via political asylum, but simultaneously maintaining their belonging to the Dalai Lama’s refugee community headed by the exile Tibetan government. This current shift in political practice is as situated in specific histories as it is geographies. These are not claims for recognition or forms of resistance, but are instead a refusal of international norms via a present-day insistence on past and future political sovereignty. This talk by Professor Carole McGranahan draws on 25 years of ethnographic research with the Tibetan community in Canada, India, Nepal, and the USA, as well in immigration courts in both the USA and Canada.

Professor McGranahan is a cultural anthropologist and historian specializing in contemporary Tibet. Her research focuses on issues of colonialism and empire, history and memory, power and politics, refugees and citizenship, nationalism, senses of belonging, gender, war, and anthropology as theoretical storytelling. Since 1994, she has conducted research in Tibetan refugee communities in India and Nepal on the history and politics of the guerilla army Chushi Gangdrug, culminating in her book Arrested Histories: Tibet, the CIA, and Histories of a Forgotten War (Duke University Press, 2010). Thinking of 20th-21st century Tibetan histories and experiences as imperial in a global sense is a key part of her work in relation to the CIA, British India, and the People’s Republic of China. Professor McGranahan work on empire beyond Europe can be found in Imperial Formations (2007, co-edited with Ann Stoler and Peter Perdue), and in Ethnographies of U.S. Empire (2018, co-edited with John Collins). Currently, she is completing a book about the Pangdatsang family, Tibet, and British India in the first half of the 20th century, and finishing a decade of research in France, India, Nepal, New York City, Switzerland, and Toronto titled “Refugee Citizenship: Asylum, Refusal, and Political Subjectivity in the Tibetan Diaspora.” She also writes about ethnography, pedagogy, and she is the editor of Writing Anthropology: Essays on Craft and Commitment (2020, Duke University Press).

This event is presented and sponsored by the Program on Refugees, Forced Displacement, and Humanitarian Responses