The Resurgence of the Old Elite: Uyghur Public Culture in China’s Reform Era 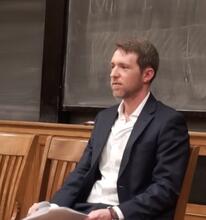 In the late 1970s and the 1980s, as Deng Xiaoping’s reform and opening policies took root in Xinjiang, a Uyghur literary elite rapidly emerged from amidst the wreckage of the Cultural Revolution. This elite, and the forms of Uyghur culture its members promoted, had been prominent during the early Mao era, when a network of young Uyghur intellectuals had formed a mutually beneficial relationship with party-state patrons. In the mid-twentieth century, these poets and writers had sought to replace existing literary conventions with new forms suited to socialism, and had invariably described their efforts as revolutionary. Yet in the 1980s, following the massive cultural disruptions of late Maoism, these same writers reinvented themselves as guardians of Uyghur tradition, and presented their radical literary innovations of several decades earlier as timeless Uyghur heritage. This talk unpacks this paradoxical history and explores some of the reform-era debates between these self-styled conservatives and the young avant-garde writers who challenged them.

Joshua L. Freeman is a historian of China and Inner Asia, with a research focus on Uyghur cultural history. He is currently a postdoctoral fellow at the Princeton Society of Fellows and a lecturer in Princeton’s Department of East Asian Studies. He received his MA in Uyghur literature at Xinjiang Normal University in Urumqi, China, and his PhD in Inner Asian and Altaic Studies from Harvard University. He is currently completing a book manuscript entitled Uyghur National Culture in Twentieth-Century China.

Freeman’s translations of Uyghur poetry have been published in The Guardian, The Times Literary Supplement, The New Statesman, and more than a dozen literary journals. His writing on the Xinjiang crisis has appeared in The New York Times, The Atlantic, and The New York Review of Books, and his translation of Uyghur poet Tahir Hamut Izgil’s memoir will be published in 2023 by Penguin Press in the US and Jonathan Cape in the UK.