A Special Screening of “Complexe” and “I Are You, You Am Me” - Tenkosei (転校生) 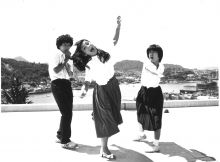 I Are You, You Am Me [a.k.a. Exchange Student] – “Tenkōsei” (Japan, 1982) 112 min.
Two classmates, the girl Kazumi and the boy Kazuo, tumble down a flight of stairs and find they’ve switched bodies. Obayashi colors the resulting gender confusion with a tinge of autobiographical nostalgia, not only filming in his hometown of Onomichi, but also framing the story through B&W 8mm film. A major hit that he remade in 2007.

Complexe (Japan, 1964) 14 min.
One of the monuments of Japanese experimental film, Complexe shares much with Obayashi’s later commercial work: a delightful play with film form, a consciousness of the camera, a charming mix of pop genres and European art cinema, and a nostalgic, if not Romanticist tone.

A Movie:  The Cinema of Nobuhiko Obayashi

One of the last major Japanese directors’ active since the 1960s, Obayashi Nobuhiko is doing a four-city tour of the East Coast, with Yale as the first stop. Little known outside of Japan, he gained a following in America with the DVD release of his debut feature film House, but our Yale event will present his other sides through screenings of three of his films and separate informal talk sessions.  A pioneer of experimental film in Japan, Ōbayashi continued to stun audiences with his stylistic flourishes even as he became one of the hit-makers of the 1980s and 1990s.  A wonderful study in contrast, he combined pop culture with literary sensibility, visual innovation with a love for classical Japanese film, and a nostalgia with a celebration of cinematic artifice, a stance evident in the words “A Movie” he attaches to many of his films.

All movies in Japanese with English subtitles. Introduced and followed by a Q&A with the director.

Sponsored by the Council on East Asian Studies and Films at the Whitney, supported by the Barbakow Fund for Innovative Film Programs at Yale
Tags:
Film
Region:
Japan