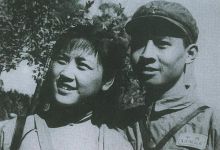 Li Jin, a solider of the New Fourth Army, stayed in Liubao  village with his Army. During Lin Jin’s stay, he fell in love with a local girl - Ermeizi. However, he had to leave Liubao with his troops for several years.  Lin Jin and Ermeizi lost contact during the war after Lin Jin had left Liubao. Years later, Jin returned to Liubao where he finds Ermeizi again.

Retrospective of Chinese Women Directors (1950s - Present) Series
This film series will present the works of four remarkable women directors, each negotiating a perspective or commentary alternative to the mainstream cinema of the time. All films are in Chinese with English Subtitles.  This is the first film of eight.