Home » Events » Tokugawa Ieyasu's Silver Telescope: A Gift from King James I, and the Meaning of Artistic Exchange Between England and Japan, 1613-1623

Tokugawa Ieyasu’s Silver Telescope: A Gift from King James I, and the Meaning of Artistic Exchange Between England and Japan, 1613-1623

Timon Screech - Professor of the History of Art, SOAS, University of London 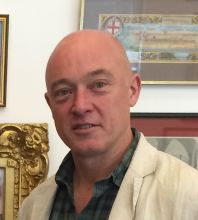 The Council is pleased to present the Sixteenth Annual John W. Hall Lecture in Japanese Studies.

In 1611, the English East India Company, founded in 1600, dispatched its first ship destined for Japan, which duly arrived in summer 1613. The Company had prepared an elaborate letter from the King to the Japanese ruler, as well as an appropriate gift. Ieyasu was presented with a silver gilt ‘prospective glasse’. It was the first telescope to leave Europe, and the first to be built as a presentation object.

The talk will consider the meaning of such a object - what the English meant by it, and why the East India Company (which was a spice trading organization) was sailing to Japan at all.

Timon Screech is currently a Visiting Research Scholar in East Asian Studies at Yale University during the Fall 2014 semester.  He was born in Birmingham, UK, and received a B.A. (Hons.) in Oriental Studies (Japanese) at Oxford, before completing his Ph.D at Harvard in 1991. He also studied at the universities of Geneva and Gakushuin. He has taught the history of Japanese art at the School of Oriental and African Studies (SOAS), University of London, since 1991, and in 2006 became Professor of the History of Art. He is also Head of the Department of the History of Art & Archaeology, and Head of the School of Arts (SOAS-SOA).

Screech is the author of some dozen books on the visual culture of the Edo period. His Ph.D was published as The Lens Within the Heart: The Western Scientific Gaze and Popular Imagery in Later Edo Japan (CUP 1996) and is still in print in a second edition (Curzon, 2002). Perhaps his best-known work is Sex and the Floating World: Erotic Images in Japan, 1700-1820 (Reaktion, 1999; second, expanded edition, 2009). More recently, he has introduced and edited the writings of two 18th-century travelers, as, Japan Extolled and Decried: Carl Peter Thurnberg and the Shogun’s Realm, 1775-1796 (Routledge, 2005), and Secret Memoirs of the Shoguns: Isaac Titsingh and Japan, 1779-1822 (Routledge, 2006). His field-defining general study, Obtaining Images: Art, Production and Display in Edo Japan was published in 2012 (Reaktion Books/Hawaii University Press). His numerous writings have been translated into French, Japanese, Korean, Polish and Romanian. He is currently working on the early history of the East India Company, and its role in cultural exchange.

Please RSVP to eastasian.studies@yale.edu by 11/6/14