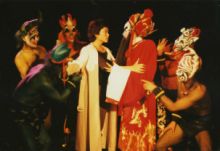 The fictional life and career of a famous actress in Chinese opera, a woman who goes against tradition by specializing in playing male roles, especially that of Zhang Kui, a benevolent ghost who appears in several Chinese operas. Although the actress’s career brings wealth and fame, it is attained only through considerable struggle against an anti-female system and an unhappy personal life.

Retrospective of Chinese Women Directors (1950s - Present) Series
This film series will present the works of four remarkable women directors, each negotiating a perspective or commentary alternative to the mainstream cinema of the time. All films are in Chinese with English Subtitles.  This is the fifth film of eight.