Home » Events » Women Writers and the Discourse on the Postwar Japan

Women Writers and the Discourse on the Postwar Japan 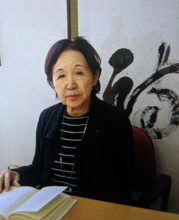 The Council is pleased to present the 22nd Annual John W. Hall Lecture in Japanese Studies.

Discourse on the Postwar (sengoron) in Japan has predominantly consisted of debates among male commentators concerning responsibility for the war. Absent from these debates are questions of how women experienced the postwar era, and of how women have attempted to overcome their experiences of the war and trauma. This absence can be attributed in part to the lack of cultural perspectives—as opposed to those that are historical, political, and sociological—in Postwar Discourse. Accordingly, this lecture examines literary works by women writers and poets whose grew up during the war, experienced the air raids, the atomic bombs, family deaths, the loss of cities and villages, and the black market, while internalizing the resulting violence, destruction, and a pervasive sense of danger and anxiety. Particular scrutiny is given to a generation of writers born mostly in the 1930s, and who began writing in the late 1950s—Morisaki Kazue, Shiraishi Kazuko, Tomioka Taeko, Oba Minako, Yoshihara Sachiko, and Tsushima Yuko. Their works enable critical perspectives on the Postwar that are only possible when considered through the prism of female representation and experience.

Noriko Mizuta is a poet, literary critic, scholar of comparative literature and educator. She received her BA from Japan Women’s University (1960) and her PhD from Yale University in American Studies (1970). After teaching at Marymount College, Scripps College, and USC, she returned to Japan where she helped to found Josai International University and served as its president from 1996 to 2009. She served as chancellor of Josai University from 2004 to 2016. Mizuta is currently the director of the International Institute for Media and Women’s Studies in Tokyo as well as the president of the Japan-Sweden Society.

Mizuta is the author of numerous scholarly monographs in English and Japanese, including Sylvia Plath: Poet of Distress (1979); The World of Poe: Crime and Dream (1980); Reality and Fiction in Modern Japanese Literature (1980); From Heroine to Hero: The Female Ego and Expression (1982); Landscape in Monogatari and Anti-Monogatari (1993); The Words Woven by Featherd Robe (1998); Tales of the Mountain Witch (in Japanese, 2002); The Encounter with Women’s Studies (2004); Modernism and the Development of Postwar Women’s Poetry (2012); Oba Minako: Memory and Literature (2013); Expression and the Outside Territory (2015); The Appeal of Poetry, The Domain of Poetry (2020); The World of Shiraishi Kazuko: Journey, Sex, and Life (2021); and Yoshihara Sachiko: The Literature of Secrecy (2022).

Mizuta has also translated literary works by Japanese writers into English, such as Japanese Women Writers (with Kyoko Selden, 1982) and The Funeral of a Giraffe: Seven Stories by Tomioka Taeko (with Kyoko Selden, 1999), as well as the poetry of Anne Sexton and Sylvia Plath into Japanese. She has translated two books by E.A. Kaplan on film theory into Japanese. Mizuta has been the recipient of numerous awards and honorary degrees from universities in Korea, China, Hungary, and Malaysia, and was awarded the Chikada Prize for Poetry in 2014.

The John W. Hall Lecture Series in Japanese Studies was established with generous support from Mrs. Robin Hall in memory of her husband.  Considered one of this past century’s finest scholars of the history of Japan, John Whitney Hall was born in Tokyo in 1916 and developed an interest in Japanese language, culture, and history at an early age. After receiving his Ph.D. in East Asian Languages and Literatures at Harvard, Hall began his academic career at the University of Michigan in 1949 and came to Yale in 1961 as A. Whitney Griswold Professor of History, a position he held until his retirement in 1983.

Professor Hall specialized in the Ashikaga through Late Tokugawa periods, and throughout his career he wrote or edited some of the most important and influential volumes on Japanese history. He contributed to the study of Japan through not only his writing, but also through service as chair of several local and national committees, including the Japan-U.S. Friendship Commission, the Association for Asian Studies, and the American Council of Learned Societies-Social Science Research Council (ACLS-SSRC) Joint Committee on Japanese Studies. The Council on East Asian Studies hopes this lecture series will enable young and old scholars alike to remember John Whitney Hall’s work and grand contributions to the study of Japan.