Home » Events » Yamashiro Chikako's "Woman in the Butcher Shop": Okinawa as an exchange object between Japan and the USA

Yamashiro Chikako’s “Woman in the Butcher Shop”: Okinawa as an exchange object between Japan and the USA 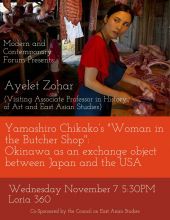 Yamashiro Chikako’s video installation Woman in the Butcher Shop considers the position of Okinawa’s Otherness within the context of Japan’s politics, especially in relation to the atrocities during the Battle of Okinawa, and the continuous US military presence on the Island. In her three-channel video projection, Yamashiro further develops the narrative of occupation and subjugation, through her use of female protagonists and meat as double metaphors to the complex triangular relationship between Okinawa, Japan, and the USA.

In this presentation, Dr. Zohar will look into the meat image in the piece, suggesting to read it through the image of “The Pound of Flesh” in Shakespeare’s The Merchant of Venice, a play known for its consideration of Otherness, xenophobia and multicultural relations. She uses Jacques Derrida’s interpretations of this play, and his idea of “The Pound of Flesh” as “An Exchange Object,” a reading which she identifies in Yamashiro’s critique of Okinawa’s ultimate Othering in the context of its relationship with Japan and the USA. Moreover, images of hinted cannibalism portrayed in the work, bring to mind several references taken from Japanese literature, used by Yamashiro as a metaphor for the consumption of Okinawa by Japan and the USA, who seem to “devour” the small group of islands for their own purposes.

This text is chapter 3 in Dr. Zohar’s coming book: Performative Recollection: Wartime Memory in Contemporary Japanese Video Art, which she completed during my time at Yale.

Dr. Ayelet Zohar is a Senior Lecturer at the History of Art Department, Tel Aviv University, and currently a Visiting Associate Professor at the History of Art and CEAS at Yale (2018). She received her PhD from the Slade School of Fine Art, University of London (2007), followed by a Postdoctoral Fellowship at Stanford University (2007-9), and a second Postdoctoral Fellowship at the Smithsonian Institution, Washington DC (2011). In 2012, Dr. Zohar was a Japan Foundation Research Fellow at Hokkaidô University, followed by two research periods at Waseda University in Tokyo (2017 and 2018). Dr. Zohar holds a personal research grant from the Israeli Science Foundation (ISF) for her work on war memory in contemporary Japanese photography and video art (2016-2019).