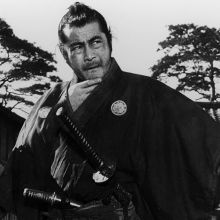 The film that introduced the most famous of samurai heroes, the nameless rōnin played by Mifune Toshirō, and which influenced many from John Belushi to Sergio Leone. This samurai inserts himself into a war between two rival gangs and, à la Red Harvest, prompts their mutual destruction.

All films in Japanese with English subtitles.

All screenings at the Whitney Humanities Center Auditorium, 53 Wall Street.