Japanese Diaspora to the Americas: Literature, History, and Identity 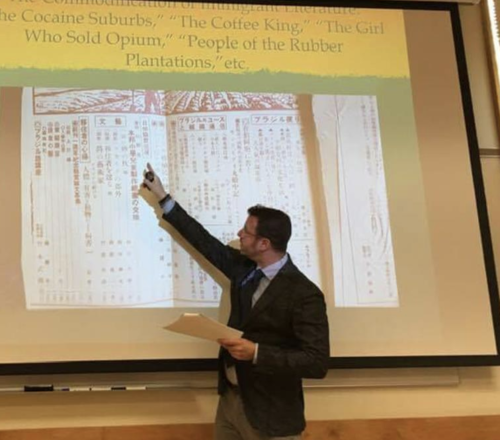 The symposium opened with the first keynote, “Japanese Diasporas’ and Other Not So Tall Tales of National Identity,” by Jefferey Lesser, Emory University. Lesser set the tone of the symposium by bringing into sharp relief the unevenness of diasporic identities and the varying, often contradictory uses of “community” in discourses of immigration and nationhood.

The second panel, “Japanese Brazilian Literature and Print Culture,” then moved the focus of discussion to the largest Japanese diasporic community in the world. Leading off the discussion, Ted Mack, University of Washington, examined the construction of family units in Japanese state-sponsored immigration to Brazil. Following the movement of these immigrants across the Pacific, Jacobowitz, serving as both presenter and chair, sought to “give some indication of how ‘immigrant colonial literature’ and its variants negotiated a new diasporic consciousness, or state of betweenness, for being Japanese in Brazil in the prewar era.” Closing out the discussion, Zeli Rivas, Marshall University, connected the past with present through her analysis of contemporary cinema and its handling of Japanese-Brazilian identity.

The third panel, “Perspectives on Japanese American History,” began with a presentation by Robert Hegwood, currently a Postdoctoral Fellow at the Reischauer Institute of Japanese Studies at Harvard University, about the rebirth of Nikkei trading companies between the US and Japan, and their broad-based movement to donate money, food, and clothing to war-ravaged Japan from 1946 to 1952 through the aid program called Licensed Agencies for Relief in Asia (LARA).  Next came Brian Massaru Hayashi, Kent State University, who examined three individual legal cases of Japanese Americans living on the periphery of the Japanese empire during World War II behaved. His presentation drew upon previously unused or underutilized materials from the US National Archives in Washington DC relevant to the war crimes investigation of Ray Uyeshima (Shanghai, China), the trial of Samuel T. Shinohara (Hagåtña, Guam), and the internment of Richard Kotoshirodo (Honolulu, Territory of Hawaii). The third presentation was by Greg Robinson, Université du Québec À Montréal, on the history of economic and cultural connections between Japan and Louisiana. In particular it addressed how New Orleans not only served as the central axis of the cotton trade with Japan, which represented the bulk of prewar US exports to Japan, but also became a pivotal site related to Japanese trade and emigration to Latin America.

The fourth panel, “Immigration and Expansionism in the Japanese Empire,” was chaired by Eiichiro Azuma, University of Pennsylvania. Louise Young, University of Wisconsin, started the panel with a presentation about the “millions to Manchuria” movement, whereby the Japanese government sought to “export the ‘excess population’ of rural poor to agricultural land in Manchuria, forcible appropriated from Chinese and Korean farmers.” The second presentation was by Andre Haag, University of Hawai’i, who introduced two novels to recast how the literature of Japan’s colonial empire and its multiethnic imperial diasporas exposed the tensions between colonial integration and insurgency. Next was Sidney Lu, Western Michigan State University, who discussed “the history of Aliança, a Japanese settler colony in the state of São Paulo, Brazil, established by Japanese elites associated with Nagano Prefecture in the 1920s.” He argued that “the migration model and racial ideology that the Japanese invented in Aliança later empowered Japanese colonial expansion in Asia.” He also elaborated on the intellectual and institutional connections between Japanese migration to Brazil and the Japanese migration to Manchuria from the 1920s to 1945. The fourth presentation by Nayoung Aimee Kwon, Duke University, discussed Min Jin Lee’s globally bestselling novel Pachinko (2017), which was swiftly translated into more than 20 languages, including Korean, but not yet into Japanese. She offered a fascinating analysis about what is voiced and silenced when writing about diasporic communities, including ethnic Koreans as one of Japan’s most enduring minority groups.

The second day of the symposium concluded with the second and final keynote, “Japanese-Brazilian Saudades: Diasporic Identities and Cultural Production,” given by Ignacio López-Calvo, University of California Merced. In his presentation López-Calvo “analyze[d] some key works and topics in Japanese Brazilian discourse and cultural production, paying particular attention to an archive of intersubjective emotions in which epistemicide, de-ethnification, and split temporality take central stage.”

The final day of the symposium began with the fifth panel, “Migrations and Multiculturalism,” chaired by Bill Kelly, Yale University. Sarah LeBaron von Baeyer, currently a Lecturer in the Department of Anthropology at Yale University, started the panel by exploring the contemporary situation of Japanese-Brazilian migrant workers who have returned to Japan in search of a ‘better life.” The second presentation was given by Ana Paulina Lee, Columbia University, who investigated the communal and gendered value of Carnival and Samba schools in Japan and Brazil. The final presentation of the panel was by Koichi Hagimoto, Wellesley College, who discussed how the positive images of Japanese immigrants in contemporary Argentine literature have both contributed to, and resisted, the ideology of Argentine multiculturalism.

Drawing upon the great diversity of perspective and expertise, discussion at the symposium ranged across literature and print culture of Japanese immigrant communities in North and South America; critical comparisons with the legacy of Japanese colonialism in Korea, Manchuria, and Northeast Asia; and lively debate about the meanings of diasporic and transnational identity. However, each of the presentations made clear the importance of a sustained and shared study of Japanese and other Asian diasporas across disciplinary boundaries. This sentiment culminated into a lively discussion during the closing round table session focusing on the state and future of the field co-chaired by Kaoru Ueda, Curator of the Japanese Diaspora Initiative at The Hoover Institution, Stanford University, and Masako Iino, former President and Professor Emerita of Tsuda University.

Audience members were drawn largely from the departments of East Asian Languages and Literatures, History, and Anthropology at Yale University, as well as from visiting students, researchers, professors, and members of the New Haven Community. During the question and discussion periods that followed each panel, panelists and audience members alike voiced a shared interest and concern for both the question of diasporic identity at large and the institutional, governmental, and systematic processes involved.