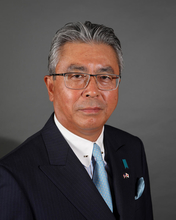 “I think what’s really interesting about him as an ambassador … is that he combines a scholarly interest in international relations law with this real-life experience,” said Professor Frances Rosenbluth, Damon Wells Professor of Political Science, as she introduced Japan’s Ambassador to the U.S., Shinsuke J. Sugiyama, to the audience on February 12.  She spoke of his many accomplishments collected through his decades-long diplomatic career, as well as his many achievements in academia—among them, his years of teaching international law at Waseda University.

Ambassador Sugiyama quickly stepped away from the podium to begin his lecture. He stood between the two rows of seats and told the crowd about his childhood—his father was a professor, and as a child, Sugiyama often had to be quiet around the house while his father read and wrote. This, he said, was why he did not want a career purely in academics.

Ambassador Sugiyama spoke about the history of Japanese foreign policy with the same familiarity as his own childhood. Japan’s emphasis on foreign policy began, he said, with Commodore Perry and Japan’s “forced opening” to the outside world. Along this vein, he spoke about Japan’s “Period of Aberration.” He agrees that the period was decidedly out of character for the island nation. To illustrate, Ambassador Sugiyama recounted a story from when his son was seven: on a flight across the Pacific, his son saw U.S. landmass for the first time and was awestruck by its size. He could not believe Japan tried to defeat such a large nation. Sugiyama agreed with his young son’s sentiments: Japanese conflict with the U.S. occurred during a radically different era in Japanese policy.

Sugiyama dated the end of the Period of Aberration around the year 1945. Since that time, he said, “It’s so safe for me to truly claim that the Japanese government has been doing its international relations and its diplomacy primarily based on International Law.” He gave a detailed account of Japanese-USSR relations in the 1950s. When the nations could not satisfy the three conditions needed for a peace treaty to be signed (legal termination of war, settlement of territory, and settlement of war compensation) due to disagreements over four northern islands in the Japanese archipelago, they instead agreed to end warfare via a joint declaration finalized in 1956. The joint declaration was not a peace treaty; rather, it was an agreement to end warfare while continuing discussions surrounding the contested northern islands.

The ambassador emphasized the sensibility of this decision. De-escalation was urgently needed to assist the half-million Japanese prisoners in Siberia, as well as to allow Japan to enter into the United Nations without fear of a veto by the USSR. This compromise, Sugiyama continued, was a way to reconcile the reality of a situation within the confines of the law. In this situation, as in many others, Japan kept with its practice of stringently adhering to the technicalities and nuances of international law.

Ambassador Sugiyama shifted his focus to the Treaty of Mutual Cooperation and Security between the United States and Japan, a security arrangement that was revised in 1960 to address what Sugiyama called the “one-sidedness” of previous arrangements. The U.S. had been obligated to defend areas under Japanese administration, but Japan had no obligation to do the same for the U.S. Sugiyama noted that Japanese assistance may not be crucial for many U.S. areas, like East-coast urban centers. Japanese defense, however, could be crucial in Hawaii and the U.S. territory of Guam.

All of these events point toward a trend in Japanese foreign policy, one that Ambassador Sugiyama pointed out directly. “Japan,” he said, “has been doing its … international relations by making formal international law, formal treaties, formal documents, signed in [their] legality.”

In international relations, Ambassador Sugiyama explained, “Legality means some of the justice [and] some of the moral high ground.” However, he said “the other side of the coin” is that an overly-procedural approach can lead to “only seeking[ing] procedural legitimacy, or procedural justice, or procedural righteousness.” There also “must be,” he said, “substantive justice [and] substantive legality on top of procedural” in international relations as a whole. “Legality must be—not always, but fundamentally be linked with morality and justice.” He concluded with this proclamation: “real justice is real morality.”