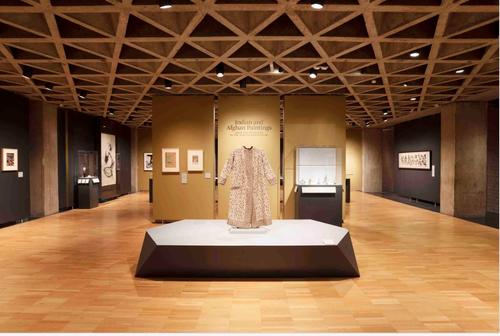 The Yale University Art Gallery will reveal a new rotation of art objects, titled “Scattered and Gathered: Perspectives on the Tekagami-jō, a Japanese Calligraphy Album,” on Thursday.

This latest installation, which is on view in the Shen Family Gallery of Asian Art, was curated by Denise Leidy, the Ruth and Bruce Dayton curator of Asian Art at the YUAG, and will remain on display until late May. The Japanese Calligraphy Album “Tekagami-jō” is on loan to the YUAG from the Beinecke Rare Book & Manuscript Library. It is the centerpiece of the installation, which also includes objects from the collections of the Metropolitan Museum of Art, Harvard University Art Museums and the Museum of Fine Arts, Boston.

The Tekagami-jō calligraphy album is an assemblage of fragments from different manuscripts and documents that have been separated, cut up and preserved at different points in their “lives,” according to Edward Kamens, a professor in the Department of East Asian Languages and Literatures who worked on the installation with Leidy.

“We’re exploring the idea of saving and repurposing,” Leidy said. “All of these fragments have existed as something else — at some point, someone gathered these things together and made them into a completely different work or art.”

In addition to the Tekagami-jō album, the installation contains a Japanese screen layered with fragments from illustrated books, fans and calligraphy books that date from the 8th to the 19th century, a Buddhist priest robe made from a patchwork of different cloths and rags, scenes from Buddhist life and representations of poetry. The installation will also feature repurposed fragments from a manuscript that the Beinecke recently acquired, called “Todaiji-gire.”

When selecting which objects to include in the installation, Leidy said that she looked for relationships between the various objects by trying to understand the “cultural relativity” and “cultural context” of fragments.

Kamens, who first proposed the idea for this installation, conceived of the project following his study of the Tekagami-jō album in the Beinecke. He said that he then solicited the help of a colleague in the Department of the History of Art, professor Mimi Yiengpruksawan, to develop the concept. Kamens presented the idea to Leidy, who agreed that the scale of their project warranted a new rotation at the YUAG. Kamens, along with the graduate students in one of his classes, collaborated with Leidy to organize the thematic sections of the rotation.

“We wanted to explore and illustrate in a variety of ways the phenomenon of fragmentation, which is quite prominent in different aspects of Japanese visual, material and literary culture,” said Kamens.

Kamens also mentioned his work with the Beinecke’s director, Edwin Schroeder, as another important impetus for the development of the project. Schroeder indicated an interest to Kamens in adding significant works of Japanese material and literary culture to the Beinecke’s collection, leading to Schroeder’s authorization of the purchase of the Todaiji-gire fragments now featured in the installation.

This rotation of Japanese fragments is one of the three rotations currently on display in the west side of the Asian art gallery. These displays rotate every May and December due to the light sensitivity of most papers and textiles in the exhibits.

Leidy mentioned that since conservation needs require changing the materials on view, she uses it as an opportunity to showcase a variety of “thematic displays” and create “different storylines.” The other current rotations feature the history and development of Chinese calligraphy, early Islamic glass, paintings from India and Afghanistan and works in the contrasting textures of cloth and clay from West, Central and South Asia.

“One of my duties is to analyze collections and figure out how it has to grow,” said Leidy. “There are always new and interesting things — it is not a static collection; it is always changing.”

This installation will open to the public with an event at 5:30 p.m. on Thursday, Feb. 28. The professors and graduate students who worked on this rotation will present the works of art.